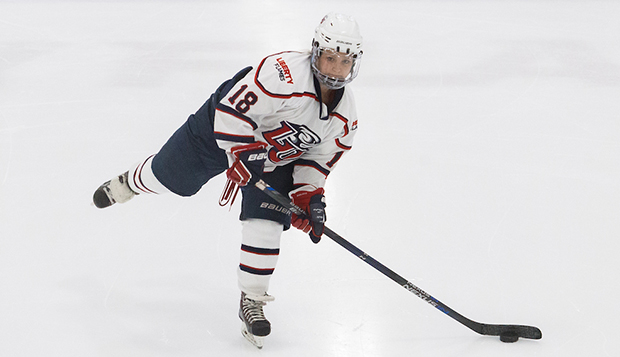 With just under nine minutes left in the second period, Greenwood received a flipped-back pass from sophomore forward Lauren McDonald, who worked the puck to her from beyond the left endline, and slammed it through the five-hole of UMass goalie Amber Greene from out in front.

The Lady Flames (25-7-1, winners of 19 of their past 20 games and 15 in a row) took advantage of three power plays in the third period to maintain pressure on the Minutewomen (21-6-4) and escape with the 1-0 win, punching their third championship game ticket in five seasons.

Liberty will meet third-seeded Miami University of Ohio (22-6-2), winner of two of the past three ACHA DI titles and Saturday's first semifinal — a 5-2 upset of second-seeded Adrian — Sunday at 4 p.m. at the Ice Haus in Columbus, Ohio, the practice facility of the NHL's Columbus Blue Jackets.

The Lady Flames revived their postseason rivalry with Massachusetts on Saturday. Liberty lost to UMass 2-1 in the first game of pool play in 2014 before going on to place third. The next year, the Lady Flames edged the Minutewomen by the same score en route to their first national title, a 4-1 triumph over Miami.

After going 1-1-1 in the regular season — losing the first game at UMass before tying the opener at the LaHaye Ice Center on Oct. 21 and winning the Oct. 22 rematch — Liberty prevailed in the matchup that meant the most.

Benefiting from a day of rest on Friday after sweeping its first-round, best-of-three-game series against eighth-seeded Minnesota, the Lady Flames generated the best quality scoring chances against the Minutewomen. Liberty outshot UMass by nearly a two-to-one margin, 42-22, but it was rejected time after time by Greene, the ACHA's top goalie who entered the tournament with nine shutouts and a 1.03 goals-against average.

With the Lady Flames on a power play midway through the first period, graduate forward Carrie Jickling one-timed a slap shot from the high slot through traffic that caromed off the right post right to a teammate in the left circle whose follow-up shot glanced off the side netting.

Early in the third period, Jickling, Liberty's all-time leading scorer, had a point-blank shot from the left crease rejected by Greene. Later, with the Lady Flames on the second power play of the period, Jickling's shot from the point bounced off the crossbar and down around Greene's feet and freshman forward Alex Smibert nearly poked it in from around the right post. Then, McDonald ripped a shot from the right circle that glanced off Greene's shoulder, barely missing the net.

Meanwhile, sophomore Kelly Hutton, making her second straight start in goal for Liberty, held her own between the pipes to record her second shutout of the season. She made a number of clutch saves in the closing minutes, including one on a shot from deep in the slot by Brittani Lanzilli and another on a breakaway by Jennifer Davis with 1:40 remaining in regulation.

Lady Flames junior forward CJ Tipping was called for an illegal check with 1:08 remaining, giving UMass a six-on-four advantage for the rest of regulation after pulling Greene from goal. But Liberty fended off the Minutewomen's final few chances, nearly putting the game away with an empty-net shot from beyond its own blue line that missed just wide of the cage.

The championship game between the Lady Flames and Miami-Ohio will be streamed live on ESPN3 through golivesportscast.com. Liberty swept the RedHawks in their only two meetings this season, Jan. 19-20 at the LaHaye Ice Center.