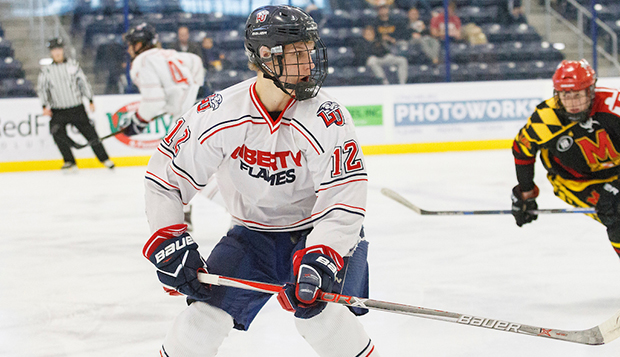 Devon Docksteader, who scored back-to-back overtime game-winners to send the Flames to the championship final last year, did it again with 41 seconds remaining in regulation against Grand Valley State. (Photo by Caroline Cummings)

When Tyson Street, a graduate forward on Liberty University ACHA Division II men's hockey team, was checked into the boards on a fast-break opportunity in the final minute of the third period, it jarred open the door at the Ice Haus, the practice facility for the NHL's Columbus Blue Jackets and home for the Final Four of the ACHA DII National Championships.

That opened a window of opportunity for the Flames (30-1-1) in Saturday's semifinal showdown with Grand Valley State, which was tied at 3-3, and senior forward Devon Docksteader burst through it.

Right off the restart, a faceoff in the Lakers' end, Liberty's leading scorer controlled the puck in the right circle and skated around the right side and along the endline toward the right post. He quickly closed in on the cage and threaded the game-winning shot from point-blank range past Jared Maddock for a 4-3 advantage with 41 seconds remaining in regulation.

"Just right when the faceoff happened, I told myself, ‘I'm scoring a goal right here,'" said Docksteader, who scored back-to-back game-winners in overtime against William Paterson and Miami-Ohio to send the Flames to last year's championship game. "I don't know how it happened, but it did."

The dramatic victory puts Liberty — which lost to Southeast Region rival Florida Gulf Coast in last year's final — back in the title matchup, set for Sunday at 7:30 p.m. The Flames will face New York University, the 2015 national champion which will move up to the ACHA DI level next season, joining the Flames' DI team in the Eastern States Collegiate Hockey League (ESCHL).

"It's going to be good competition, but we're really excited to be back in the finals," said Docksteader, the fourth brother to come through the Flames' program who is making his fourth straight trip to nationals. "This time, we're looking to take it home."

Junior forward Paul Lamoureux and senior forward Ben Freymond lifted Liberty to an early 2-0 lead with back-to-back first-period goals, the last off a spectacular give-and-go pass through the crease by graduate forward Danny Logan. Grand Valley State (25-4-3) broke through to end the shutout with 25 seconds left in the stanza when defenseman Lucas Little finished a point-blank putback of a shot through the slot past Flames sophomore goalie Jarrett Epp.

The Lakers maintained the pressure from the outset of the second period and soon tied the contest at 2-2. After Cameron Dyde struck the crossbar with a shot from the right crease and Epp denied a one-on-one opportunity by Collin Finkhouse, Reede Burnett deflected in a shot from the high slot by Alex Ostrowski past Epp for the equalizer.

"We looked really sharp in the first period and they got some momentum there in the second," Flames Head Coach Chris Lowes said.

Liberty didn't waste any time before capitalizing on its first power play of the third period when Freymond fired a turnaround shot from the edge of the left circle off assists from senior forward Jordan Barstead and junior forward Robert Ward with 13:46 remaining in regulation just seven seconds into the man advantage.

But the Lakers responded quickly to retie the game less than two minutes later when Ryker Barber put away a drop pass in the right crease on the tail end of a fast break with 11:54 to go.

Moments later, Grand Valley State had a golden chance to seize its first lead on a two-on-one pass play deep in the Flames' zone, but Epp made a spectacular glove save of a high shot from the right circle off the stick of Austin Koleski, preserving the tie.

After Liberty graduate forward Danny Logan was called for tripping midway through the period, Ward had a shorthanded breakaway opportunity denied by Maddock, but the Flames killed the penalty. Over the next several minutes, action moved quickly back and forth and both teams applied offensive pressure as Lamoureux had a shot in front blocked by Maddock before Street started a fast break that set up the game-winning goal.

Sunday's final can be streamed live on ESPN3 through golivesportscast.com.