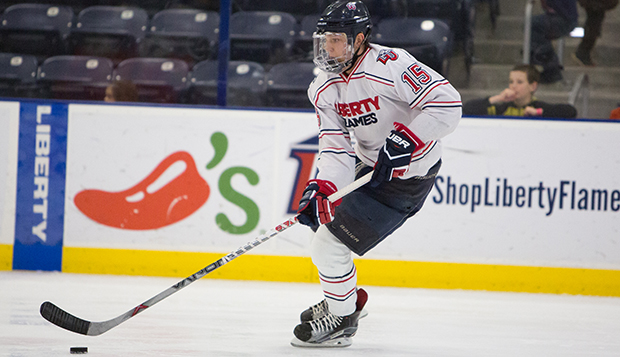 Hockey fans refer to it as Black Friday — elimination day in five-day tournaments such as this week's ACHA Division II Men's Hockey National Championships, with 12 of the 16 teams sent packing following Friday's third and final rounds of pool play at The Chiller in Dublin, Ohio.

Liberty University's DII men's hockey team wasn't one of them as the Flames (29-1-1, the No. 2 seed out of the Southeast Region) answered three consecutive goals by Williston State (N.D., 15-10-2, the No. 1 seed out of the West Region) with three of their own to pull out a 4-3 victory and advance out of pool play into the Final Four undefeated for the second year in a row.

Needing a win or a tie to reach Saturday's semifinals — since the Tetons lost their first-round game to Lindenwood — Liberty rallied from a 3-1 second-period deficit by capitalizing on second- and third-period power-play goals by senior forward Devon Docksteader to tie the game before junior forward Tim Bierema added an empty-netter with 22 seconds left in the 10-minute sudden-death overtime.

Brandon Kayter lifted Williston State to a 2-1 lead with 16:11 left in the second before Liberty killed a penalty midway through the period, with sophomore goalie Jarrett Epp making a couple critical saves with help from his defensemen in front.

Matthew Winkle stretched Williston State's lead to 3-1 with 6:35 to go in the second period before Docksteader ended a 36-minute scoring drought for the Flames by finishing on a five-on-three opportunity.

Liberty demonstrated patience as its man advantage wound down with 11:35 left in the third period, when tic-tac-toe passing from Ward and senior forward Jordan Barstead set up Docksteader's second power play goal — a one-timed shot from the right endline that beat Tetons goalie David Krejcik top shelf to tie the game at 3-3.

The Tetons pulled their goalie for the final 54 seconds of the extra period and the Flames repelled a furious onslaught before icing the win on a long-range shot by Bierema into the open cage.

Williston State, which scored four unanswered goals in the third period to overcome a one-goal deficit and eliminate Keene State, 6-3, on Thursday, was making its first appearance in the ACHA National Championships. Liberty is competing in its fourth in a row after reaching last year's championship game and falling to Southeast Region rival Florida Gulf Coast.

Saturday's first semifinal pits Miami-Ohio against New York University, which eliminated FCGU in overtime on Friday, at 12:30 p.m. before Liberty takes on Grand Valley State at 4 p.m. at the Ice Haus, the practice facility for the NHL's Columbus Blue Jackets in Columbus, Ohio. The winners will meet in Sunday's 7:30 p.m. championship game, also at the Ice Haus.

All games in the ACHA National Championships are being streamed live by golivesportscast.com.