UPDATE: No. 1 Lady Flames to take on No. 4 UMass in semis 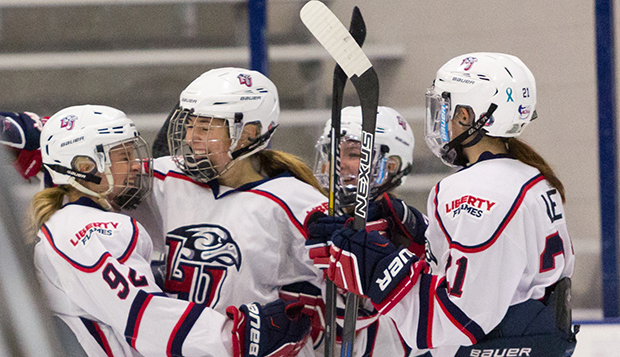 UPDATE: Top-seeded Liberty University's ACHA Division I women's hockey team will challenge No. 4 Massachusetts, a 4-2 winner over No. 5 Lindenwood-Belleville in Friday's deciding third game, in Saturday's second semifinal, set for 6 p.m. at The Chiller in Easton, Ohio. The winner of that game will play the winner of the other Final Four matchup between No. 2 Adrian and No. 3 Miami-Ohio on Sunday at the Ice Haus in downtown Columbus, Ohio, the practice facility for the NHL's Blue Jackets.

Liberty defeated Miami, winners of two of the past three titles, for its only national championship in 2015. The Lady Flames went 1-1-1 against UMass this season.

All games in the ACHA National Championships, held at a central location for the first time, are being streamed live by golivesportscast.com.

Top-seeded Liberty University's ACHA Division I women's hockey team clinched its fifth consecutive ACHA Division I Final Four appearance by eliminating eighth-seeded Minnesota, 4-2 on Thursday night at The Chiller in Easton, Ohio. The Lady Flames got a goal and two assists from freshman defenseman Rachel Gibson in their second win in as many nights in the best-of-three first-round series.

"The teams were pretty equal and it was a little rough and tumble out there tonight," Liberty Head Coach Paul Bloomfield said. "They're a gritty team and we had to work hard to get them down. It was well deserved for the girls to have a break (on Friday). I'm glad it's done so now we can focus on resting up and getting ready for the semifinals on Saturday."

The Lady Flames (24-7-1) — winners of 18 of their past 19 games following a 6-6-1 start — will find out after Friday's deciding third games between No. 2 Adrian and No. 7 Michigan State as well as No. 4 Massachusetts and No. 5 Lindenwood-Belleville who they will face in Saturday's second Final Four matchup, set for 6 p.m. back at The Chiller in Easton.

"It won't be Adrian and it won't be (third-seeded) Miami," Bloomfield said. "If Michigan State beats Adrian, we will play them and if Adrian wins, we'll play the winner between Lindenwood (Belleville) and UMass."

The Golden Gophers (21-5-3) were making their first trip to the National Championships since upsetting the top-ranked Lady Flames in the 2013 final. Minnesota seized a 1-0 lead just over five minutes after the opening faceoff when Jordan Anderson capitalized on the first of its three first-period power plays.

Liberty generated nearly as many scoring chances at even strength and netted the equalizer when Gibson's shot from the right point, set up by junior defenseman CJ Tipping, deflected off the stick of defenseman Kristina Anderson into the top left corner the net, tying the game at 1-1.

Graduate forward Carrie Jicking lifted Liberty to a 2-1 lead at the 17:27 mark of the second period by putting away a sharp-angled rebound from the left side off a shot from the right wing by Gibson as Lady Flames sophomore forward Lauren McDonald was tripped up in the right crease.

Jickling, who moved into a tie with McDonald for the team's season scoring lead with 35 points, rotated in to play on all three of Liberty's lines, complementing every forward tandem she played with.

"Last night's game, we hadn't played for four weeks and Carrie hadn't played for eight, so we were kind of getting everybody back in it again," Bloomfield said of Jickling, who showed no signs of rust as she netted a hat trick in Wednesday night's opener.

Minnesota proved to be resilient, re-tying the game at 2-2 with 10:13 left in the period, just shy of the game's midpoint, when forward Lyndsay Oden worked the puck from right to left across the crease to defenseman Aimee Krebsbach for a two-on-one fast-break counterattack.

Less than three minutes later, the Lady Flames demonstrated some tenacity of their own, swarming around the cage to reclaim a 3-2 lead on a multiple-stick jam play off the rebound of another Gibson shot from the perimeter. McKenzie Carroll got her stick on the puck before fellow freshman forward Aly Morris stuck it in for the game-winner from the right side with 7:28 left in the second period.

"Aly finished it off after it was floundering around there," Bloomfield said.

Jessica Nkhata nearly tied the game shorthanded late in the second period when she stole the puck behind the net and had her wraparound shot denied by sophomore goalie Kelly Hutton, who saved another shot by Nkhata moments later as she skated in through the high slot.

With 12:18 remaining in regulation, freshman forward Deena Birney crashed the cage and cashed in for the final score, slipping her shot through the five hole to give the Lady Flames a two-goal advantage.

The Golden Gophers pulled their goalie for the final three minutes of play and whittled Liberty's shot advantage down to 34-31 for the game. However, Hutton stood up to the challenge with a series of saves, spreading to the butterfly position to stop a shot from the right circle by Nkhata in the final minute.

The Lady Flames will take it one shift at a time as they contend for their second ACHA DI national title in three seasons. There is the potential for a championship rematch between Liberty and Miami-Ohio, winners of two of the last three crowns, which eliminated the Lady Flames in overtime in last year's semifinals. The RedHawks swept their first-round series against sixth-seeded Grand Valley State, 4-2 and 2-1, in a rematch of last season's championship game.