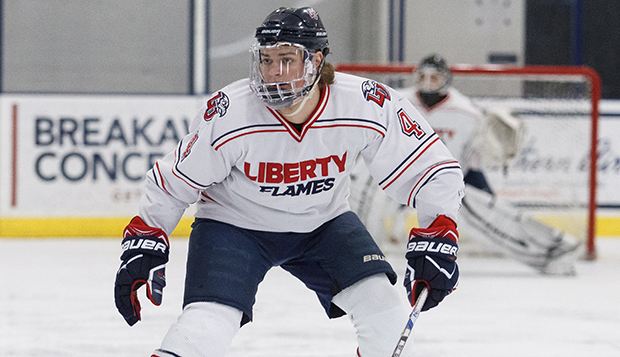 Special teams play — both on the power play and the penalty kill — separated Liberty University's ACHA Division II men's hockey team from Lindenwood in Thursday's 3-1 triumph in the second round of pool play at the ACHA DII National Championships at The Chiller in Dublin, Ohio.

The Flames (28-1-1, the second seed out of the Southeast Region) scored two of their three goals with a man advantage and shut down the Lions (20-8-2, the fourth seed out of the Central Region) on all six of their five-on-four opportunities.

"The bottom line is we played a lot better than we did (in Wednesday's 5-3 win over Keene State)," Liberty Head Coach Chris Lowes said. "We played good two-way hockey, even a man down, and outside of a power play goal they scored five-on-three, we were pretty much in control. We had seven penalties and they scored on one and we scored on two of their seven, so our special teams were a little better and we were better overall."

The Flames only outshot Lindenwood, 38-36, for the contest, but worked to generate better quality scoring chances. In the first period, they capitalized on their first power play with excellent puck movement when junior forward Tim Bierema finished feeds from senior forwards Devon Docksteader and Ben Freymond.

"That was a real nice passing play to Tim right out in front, where he tapped it into the open net," Lowes said.

Just 27 seconds after the second-period faceoff, Liberty freshman Victor Blomberg received a pass from junior forward Robert Ward and beat Lindenwood goalie Clint Steinmeyer glove-side to put Liberty up 2-0. With the Flames on a power play six minutes later, Docksteader and Freymond hit posts from close range before senior forward Jordan Barstead finally put away the rebound of a shot Freymond, beating Steinmeyer five-hole to boost the lead to 3-0 with 11:56 remaining in the second period.

"We were kind of all over them and Barstead scored off a scramble, so that was a great goal and it put us in good shape," Lowes said. "It was a low shot off a rebound and he picked a nice spot through the goalie's legs."

Lindenwood finally got on the scoreboard late in the second period, capitalizing on its five-on-three opportunity when defenseman David Allen's shot from the right wing found the upper netting, sneaking through traffic out front and past Flames sophomore goalie Jarrett Epp.

Epp, who was cut from Liberty's DI, DII, and DIII teams as a freshman, made a few clutch saves on that penalty kill and stopped a point-blank shot from the left crease with the teams battling four-on-four in the final 30 seconds of the period. He improved to 16-1 with his second straight win at nationals, lowering his goals-against average to just over 2.00.

"He continues to play good and is getting more confidence as the week goes on," Lowes said.

The Flames can clinch a bid to Saturday's semifinals if Keene State upset Williston — the top seed out of the West Region, which lost to Lindenwood on Thursday — in Friday's afternoon game. If the Tetons prevail, Liberty must defeat or tie them in Friday's 7:45 p.m. matchup, the third and final round of pool play, in order to advance.

"We control our own destiny," Lowes said. "All these games are back and forth. If we had lost today, we would have been in trouble. If we play a little better than we did today, we'll be in good shape tomorrow."