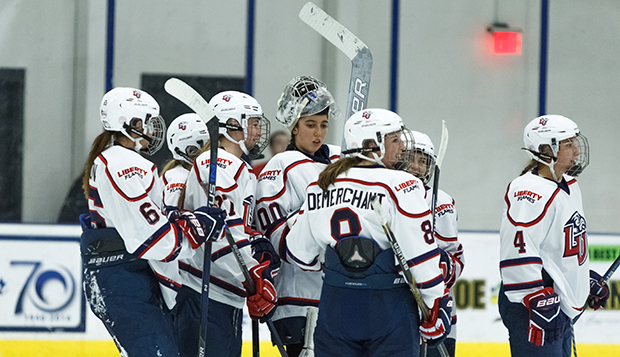 Playing in her first game in nearly two months, Carrie Jickling — a graduate forward on top-ranked Liberty University's ACHA Division I women's hockey team — contributed a hat trick to seal a 6-4 triumph over eighth-seeded Minnesota in the first game of a best-of-three opening-round National Championships matchup, Wednesday night at The Chiller in Easton, Ohio.

Jickling, the Lady Flames' all-time leading scorer, is one of two players (along with injured graduate linemate Catharine Burrell) who was on the team during the 2013 national championship game, when the Golden Gophers upset top-ranked Liberty.

She missed the last month of the regular season with an injury of her own and slipped to second behind sophomore forward Lauren McDonald on the Lady Flames' season points leader list.  After McDonald scored Liberty's first-period goal off an assist from Jickling, tying the game at one, Jickling moved back within one point of her with her team-high 20th, 21st, and 23rd goals of the year.

Liberty Head Coach Paul Bloomfield didn't see any of them as he was too occupied trying to shore up his defense, which allowed the Golden Gophers (21-4-3) to open a 2-1 first-period lead.

"We were scrambling a little bit, working the defensive lines," Bloomfield said. "We had some breakdowns, letting stuff through that shouldn't have gone through, and that's when they got their goals."

Trailing 2-1 after the first period, Liberty (23-7-1) rallied for three consecutive goals — the last by junior defenseman CJ Tipping 10 minutes into the second period — to seize a 4-2 lead at the game's midpoint.

After Jessica Nkhata was left all alone in front and beat Rupoli to trim Liberty's lead to 4-3 with 7 minutes left in the second period, Jordan Anderson netted the equalizer six minutes later, knotting the game at 4-4 before the second intermission.

With 7:27 remaining in regulation, the Lady Flames (22-7-1) capitalized on their third power play opportunity of the third period. Just seven seconds into the man advantage, junior forward Chelsey Greenwood's one-time slap shot from the top of the left circle lifted Liberty to a 5-4 lead.

That proved to be the game-winner — Greenwood's  team-high sixth of the season — before Jickling capped the scoring, and completed her hat trick, with her prettiest goal of the night at the 5:40 mark. She sliced through the left circle and avoided a defenseman's check with a pull-back, toe-drag move before slipping a backhanded shot into the lower corner past a drawn-out Westfield, who entered the game with a 1.36 goals-against average and six shutouts.

"The girls kept battling and kept digging and it wasn't pretty, but the end result is what matters," Bloomfield said. "We have a lot of freshmen who haven't been in these kind of pressure situations, but I feel really good about them. As many freshmen as we've got, they're rolling and I'm looking for good things ahead. We've got to look after one game at a time and take care of business, and not give them too big a job. Take one shift at a time and see what they can handle."

He hopes the Lady Flames shook the rust off their skates in the opener and can put the Golden Gophers away earlier in the second game — Thursday at 8 p.m. back at The Chiller in Easton — to earn a day off Friday before Saturday's semifinals.

"We haven't played for more than a month, and we haven't played Minnesota (since 2013), so that's kind of the downside," Bloomfield said. "We knew no matter who we came up against, they were going to be pretty competitive. I feel a lot better about (Thursday) night's game because now we know who they are and who can move the puck."

All games in all five divisions of the ACHA National Championships are being streamed live.