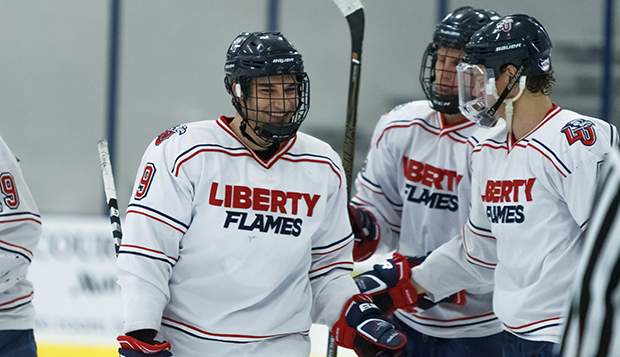 Competing for the first time in nearly a month, Liberty University's ACHA Division II men's hockey team overcame a slow start and a late lapse to emerge with a 5-3 victory over Keene State College in Wednesday's first round of pool play at the ACHA DII National Championships near Columbus, Ohio, at The Chiller in nearby Dublin.

The Flames (27-1-1) scored three unanswered goals — one at even strength, one shorthanded, and one on a power play — over a 20-minute stretch spanning the first and second periods to erase an early 1-0 deficit and seize a 3-1 lead. For the contest, Liberty outshot the Owls (14-6-2) by a 37-35 margin.

"I don't think any of us thought we played up to our potential, but we did enough," Flames Head Coach Chris Lowes said. "I hope we play better tomorrow and even better on Friday because (Thursday's game against Lindenwood) will be a real good test and Friday's game (against Williston State) will be an even better one."

The Flames, seeded second out of the Southeast Region, bypassed the regional tournament and received an autobid to nationals for the second season in a row. That gave Liberty extra rest and a chance to return graduate forwards Danny Logan and Peter Kazmierczak from injury, and the team was able to stay sharp over the idle period since winning its first Mid-Atlantic Collegiate Hockey (MACH) tournament title on Feb. 19.

Senior forward Devon Docksteader, the Flames' leading scorer on the season, netted the equalizer on an odd-man rush at even strength midway through the opening period. With Liberty on a penalty kill late in the stanza, senior forward Jordan Barstead took advantage of a breakaway to score shorthanded, giving the Flames a 2-1 lead and all the momentum they would need going into the second period.

"Barstead blocked a shot and got a breakaway and buried a shot five-hole," Lowes said.

Liberty, one of the more dangerous teams in the ACHA on the power play, capitalized in the closing second of its second opportunity in the second period when senior defenseman Ryan Sidun received a pass from junior forward Paul Lamoureux and launched a shot from the left side of the blue line past Keene State goalie Carlin Testa.

Liberty improved to two-for-three on the power play with just under 13 minutes to play when Docksteader finished a fast-break feed from senior forward Ben Freymond, the Flames' second-leading scorer, to extend the lead to 4-1.

"Ben did most of the work and found Devon, who didn't miss," Lowes said, noting Docksteader's finishes off Freymond's assists were critical. "We executed and finished the few chances they gave us and that makes all of the difference in the world."

However, the Owls (14-6-2), who had a third-period goal called back by a high stick penalty on a deflection, battled back, cutting the deficit to 4-2 by converting off the power play for the first time in five chances. Derek Clark's slap shot through traffic from the high slot — set up by Matt Girard and Andrew Karlin — sneaked past Liberty sophomore goalie Jarrett Epp (32 saves) with just under 5 minutes left in the third.

With 1:52 remaining in regulation, Keene State made it a 4-3 contest by scoring a second power-play goal on another shot from the perimeter by Clark before the Flames got an empty-netter from graduate forward Tyson Street — who chased down the puck on the back boards and tucked it into the net from the right side — for the final score with 20 seconds to go.

The Tetons played Minot State, the top-ranked team in ACHA Division I seven times, beating the Beavers once and falling twice in overtime.

This is the first year all five divisions of the ACHA National Championships are being played in the same general location, with Liberty's DII men's team planning to attend at Wednesday's 8 p.m. opener of the Lady Flames' best-of-three-game DI women's series against Minnesota at The Chiller in Easton, Ohio.