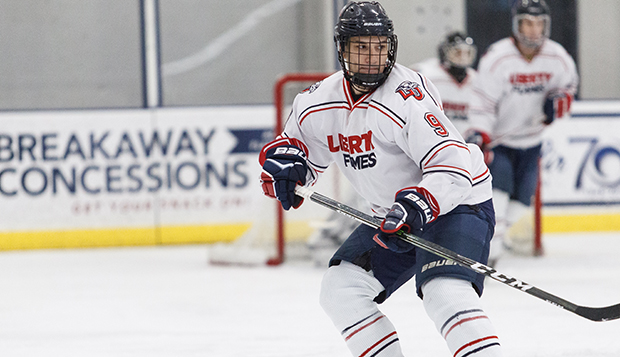 Junior forward Paul Lamoureux has helped strengthen the Flames' offensive lines this season, along with players like graduates Danny Logan and Peter Kazmierczak, who have returned from injury. (Photo by Caroline Cummings)

Seeded second out of the Southeast Region, Liberty's ACHA Division II men's hockey team is riding a 13-game winning streak into its fourth consecutive ACHA Division II National Championships in Columbus, Ohio, where it hopes to improve on its runner-up showing to Florida Gulf Coast, the Southeast's top seed, at last year's event.

The Flames (26-1-1), coming off their first Mid-Atlantic Collegiate Hockey (MACH) tournament championship, open the tournament Wednesday at 10:45 a.m. in a first-round pool play game against Keene State (N.H.) College (14-5-2), the third seed out of the Northeast Region, at The Chiller in nearby Dublin.

Only the top team out of each four-team pool will advance to Saturday's semifinals at the Ice Haus, the practice facility for the NHL's Columbus Blue Jackets located adjacent to the Nationwide Arena.

"We'll know by Day 2 where we stand, what our chances are, and what we need to do to get out," Flames Head Coach Chris Lowes said. "Everyone has aspirations to get out of their pool, and in our pool, each of the four teams have a realistic shot. In our pool, we could have two teams go 2-1 and one go 1-2. Going to be tough for any team to finish 3-0."

The first tie-breaking criteria, if needed, is head-to-head matchups, but games can end in ties in pool play, so that may not decide which team advances. Goal differential is a secondary tie-breaking factor, so teams will try to run up their scores if they can, as they did during the regular season when computer rankings weighed scoring totals into the equation.

Liberty is at full strength for the first time in nearly two months, after graduate forwards Peter Kazmierczak and Danny Logan returned from injuries to start practicing with the Flames three weeks ago.

"We have 25 healthy guys, but we can only dress 22," Lowes said. "We've had a good two weeks of practice and we're coming off an overtime win (over Penn State) in the MACH final which got our competitive juices flowing. We will have some nerves the first game, when the guys are going to have a lot of stored-up energy. It may take a few minutes to get back in the groove with our execution, but we're excited to get going."

Lowes said a strength of this year's team is the depth of firepower the Flames feature on their four forward lines.

"Every team there has a good line or two lines," he said. "Our ability to dress four dangerous lines, four skilled lines will hopefully be something that gives us an advantage."

Special teams is another area that favors the Flames, both on the power play and the penalty kill.

"Other teams don't want to put us on the power play, and if they don't, we'll be happy to grind out games five on five," Lowes said.

Every game in all five divisions of the ACHA National Championships is being streamed live.