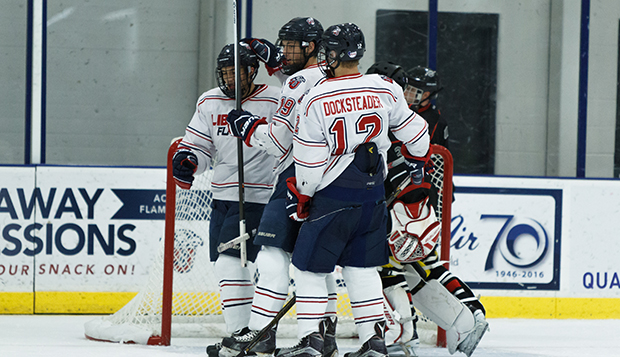 Two of the highest-scoring players in Liberty's DII men's hockey history, Docksteader and Freymond enter this week's ACHA DIKI National Championships in Columbus, Ohio, neck-and-neck for the team scoring lead. Docksteader has 81 points on 34 goals and 47 assists while Freymond has 80 on 25 goals (including a team-high six game-winners) and 55 assists.

"There's definitely competition," Freymond said. "We both like know it's secretly there. We don't need to mention it to each other, but I don't want Devon to be higher than me and he doesn't want me to be higher than him. We obviously want each other to do the best we possibly can (and) I get the majority of my points coming off Devon's stick, so it works both ways."

"On the ice, if one person has a couple goals and the other doesn't, we'll always work to get the other person a couple goals," Docksteader added. "We want to help each other out and make each other feel like we're playing at the same pace and still in the game."

"I feel a bit of pressure," Docksteader said. "Last year we came so close. (His brothers) were all very supportive. They came out to watch or were watching online. I had a lot of support that way so maybe not so much competition. They want me to win as much as I do. It'll definitely be great this year to come home with (the title)."

The Flames (26-1-1, the second seed out of the Southeast Region) open the tournament Wednesday at 10:45 a.m. in a first-round pool play game against Keene State College (14-5-2), the third seed out of the Northeast Region, at The Chiller in Dublin, Ohio. Liberty's second and third pool play matchups are set for Thursday at 11 a.m. against Lindenwood (20-7-2), the fourth seed out of the Central Region, and Friday at 7:45 p.m. against Williston State (14-10-2), the top seed out of the West Region, also at The Chiller. Only one team out of each four-team pool advances to Saturday's semifinals at the Ice Haus, the practice facility of the NHL's Columbus Blue Jackets. Located adjacent to Nationwide Arena, that will also be the site of Sunday's 7:30 p.m. championship game.

Every game in all five divisions of the ACHA National Championships is being streamed live.