Gilmour discusses transformation as a player, believer at LU 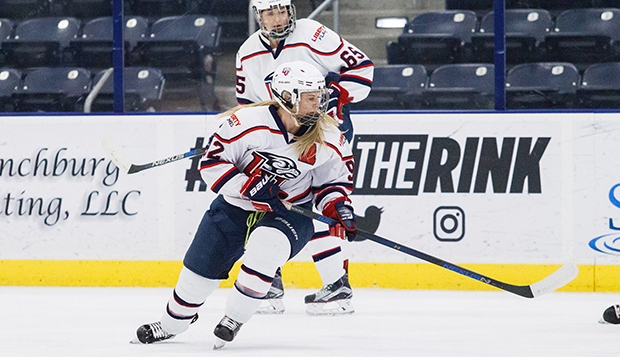 Liberty University ACHA Division I women's hockey senior forward Courtney Gilmour is featured on this player profile interview with Club Sports Video Coordinator Patrick Strawn, who talked with her about her decision to continue her career with the Lady Flames and eventually become a Christian.

Gilmour, who started playing the sport at age 3, was raised in a hockey family as her father played for the Ottawa 67s of the Ontario Hockey League.

"For as long as I can remember I was playing hockey," said Gilmour, who first came to Liberty as a member of the Hamilton Hawks' Midget AA team for a 2012 exhibition game against the Lady Flames. "We did a tour and I just fell so in love with this school. When I did the tour, I wasn't saved and walking around campus, everyone was just so genuine and nice. They all had something and I didn't know what it was and that was kind of what really intrigued me to come here."

The spiritual element of the team is what led her to accept Christ as her personal Savior and has continued to encourage her in her Christian walk throughout her Liberty career.

"It's just so nice being on a team where when you're down, girls want to pray for you and we can pray for everyone on our team and whatever our families are going through," said Gilmour, who has now become emboldened to share her faith. "People see Liberty hockey on our coats and they come up to us and … first they come and talk about hockey, but then you can go into more depth about where you are (spiritually)."

Gilmour and the Lady Flames are in Columbus, Ohio, this week to compete in her fourth ACHA Division I National Championship tournament.