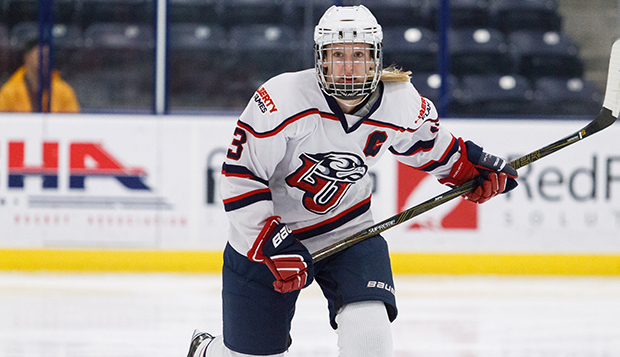 Liberty University's ACHA Division I women's hockey team concluded the regular season as the hottest team in the nation, winning 16 of its final 17 games and 12 in a row to land the No. 1 seed for this week's ACHA DI National Championships in Columbus, Ohio.

The Lady Flames (22-7-1) open play in their ninth national tournament in the 11 years since the program started, Wednesday at 8 p.m. against Minnesota, which upset top-seeded Liberty in the 2013 championship game.

A new format to the National Championships will feature four best-of-three quarterfinal series from Wednesday through Friday at The Chiller in Easton. The winners will advance to Saturday's semifinals with those two winners facing off in Sunday's 4 p.m. championship game in the Ice Haus — the practice rink for the NHL's Columbus Blue Jackets located adjacent to Nationwide Arena.

Liberty, which hasn't played in more than a month since adding two games at Penn State on Feb. 10-11, overtook Adrian for the No. 1 spot in the final ACHA DI ranking, released Feb. 26. That secured the Lady Flames' first-round matchup with the eighth-seeded Lady Gophers (21-3-3).

Other best-of-three opening matchups pit second-seeded Adrian against No. 7 Michigan State; No. 3-seeded Miami University of Ohio — winners of two of the past three national crowns — against No. 6 Grand Valley State; and No. 4 Massachusetts against No. 5 Lindenwood-Belleville.

Liberty, which defeated Miami-Ohio for the Lady Flames' only national title in 2015, would face the winner of that series between UMass and Lindenwood-Belleville if it can get past Minnesota, which tied Miami-Ohio in the regular season. Games 2 and 3 (if necessary) are set for 8 p.m. on Thursday and Friday.

"They haven't played as many games as we have, but they show up at the most opportune times and do damage," Lady Flames Head Coach Paul Bloomfield said of Minnesota.

Bloomfield said the tournament is more wide open than in previous years, with no clear favorite in the field.

"You've got to take care of business because all the teams that are going to be there — whether you're going against Minnesota or Miami — are strong," he said. "Just because we're in first place, doesn't make it a walk in a park. Everybody's hoping they can win two games and have Friday off, but the reality is you've got to show up and play two good games and win them both. They're all pretty competitive (first-round matchups) so everybody's probably going to be playing (in the tie-breaking third games) on Friday."

Graduate forward Carrie Jickling, Liberty's all-time leading scorer, will be back in action, but playing without graduate linemate Catharine Burrell, who, like Jickling, missed the last month of the regular season due to injury.

"I think everybody else is healthy," Bloomfield said. "We have a lot of freshmen, so it's hard to know their mindset, but I'm hoping they'll all be ready to go."

All ACHA National Championships tournament games are being streamed live through golivesportscast.com with Sunday's championship game also webcast by ESPN3. 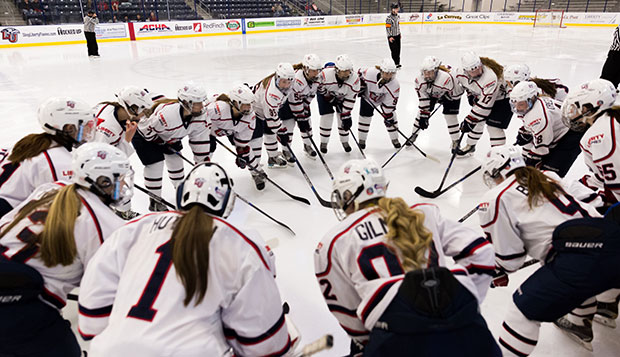