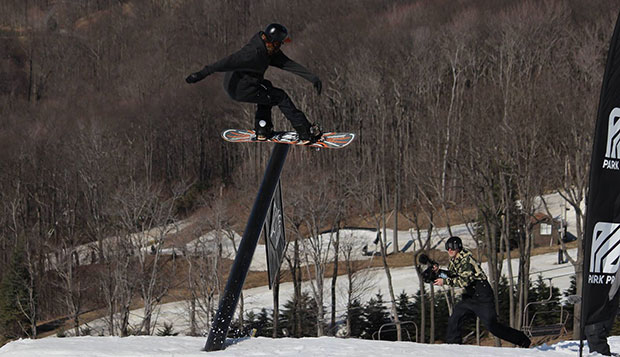 Liberty University's men's ski & snowboard teams saved some of their best performances for last at this week's 39th United States Collegiate Ski & Snowboard Association (USCSA) National Championships on Mt. Bachelor in Bend, Ore. The Flames placed third out of 23 teams in Friday's snowboard Slopestyle competition and followed that up with a third-place team showing in Saturday's ski Slopestyle event.

Liberty's snowboard team, which landed on the team podium for the second time with its top-three finish, was led by graduate Kevin Hoff's 10th-place showing, which also put him on the individual podium.

"Kevin chose a great line for his run, incorporating some very technical tricks and spinning both ways," Flames Head Coach Ryan Leeds said. "He was not extremely pleased with his run in the finals because didn't land as cleanly as he wanted to, but it was still a technical enough run to get him into the top 10 and boost our team score."

"Both Austin and Jared had really good runs," Leeds said. "Jared was extremely comfortable with his run, and one thing that boosted his score was amplitude. He went bigger than a lot of people in the field and Austin spun both ways on his tricks, which the judges like to see."

"It was definitely one of our most consistent national appearances," Leeds said. "We've never placed higher than third in Slopestyle, so we were pleased with it. It was hard to compete against Sierra Nevada and Westminster when they're able to train on 60-70-foot jumps during the regular season and we don't get a lot of snow in the Southeast."

Heavy snowfall had postponed the men's snowboard Slopestyle competition from Wednesday to Friday, after the Flames had placed third and fourth as teams, respectively, in the snowboard and ski Rail Jam events on Tuesday.

In Thursday's competition, Liberty's snowboarders and skiers placed ninth as a team in Boardercross and 13th as a team in Skiercross, respectively, with no individual finalists.

"We didn't do as well in boardercross, but that's not our strongest event, so it was not a surprise," Leeds said, noting that a number of alpine athletes that normally only compete in slalom or giant slalom crossed over into the freestyle Boardercross and Skiercross events and crowded the Flames out of the field. "We'll probably do more training to be more competitive in the future."

Finally on Saturday, the Flames put one skier into the Slopestyle finals, sophomore Jonathan Wong, who finished 12th to lead Liberty to a third-place team finish behind Vermont (8 points) and Sierra Nevada (19 points), which combined for nine of the top 10 individual place-winners. Liberty (42 points) edged fourth-place Colorado Boulder (44), which had the remaining finals participant.

"They were extremely talented in the Slopestyle competition," Leeds said. "Jon Wong put down a run that was not super technical, but one he knew he could land."

"He put down a really good run, but the official on the second jump said he dragged his hand, which didn't allow him to qualify," Leeds said.

"We got a lot of snow, which was very fun to ride on on our days off," he said. "We have such a young team, and being out here for an entire week and sharing a house allowed us to continue to grow relationships and challenge each other as a group."

The Flames didn't spend as much time getting film footage at nationals as they would have if their seven-man videography team had advanced to the finals of the Red Bull Reel Snow bracket challenge, an epic knock-out video edit battle. Liberty advanced to the Final Four before being ousted by the University of Denver early Friday morning, 6,914-6,815 in total votes.

"We were leading for a little while, but a late push put them over the top by 100 votes," Leeds said.