Flames wrestlers off to strong start at NCWA Grand Nationals 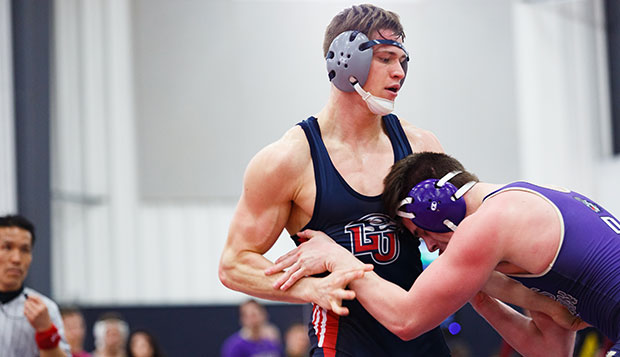 Wrestling action in the first two days of the NCWA Grand National Championships at the Allen (Texas) Event Center was fast and furious, and Liberty University's 16 qualifiers kept pace to put themselves in second place going into Saturday's final rounds of competition.

The Flames are guaranteed seven All-Americans for top-eight finishes, including senior co-captain Josh Ferenczy, who is in the 174-pound final.

Liberty, which captured its first NCWA team championship in 2015, may not be able to challenge defending champion Emmanuel (Ga.) College for the crown, however, as the Flames trail in the team standings 193.5-137. The two teams met in the NCWA National Duals, hosted for the first time by Liberty in the LaHaye Ice Center (with special flooring placed over the ice), where the Lions defeated the Flames, 33-13 in the championship bout. Emmanuel earned 24 team points from that triumph and the Flames took 23 points from that tournament into this weekend's event, which returned to Texas after taking place in Florida last year.

On Wednesday, Ferenczy, the tournament's No. 1 seed who eclipsed 100 wins for his Liberty career during the Mid-Atlantic Conference (MAC) tournament hosted by Liberty, started his bid for a national title with a 15-4 major decision over MIT's Frank Soucy. Ferenczy then scored a 16-0 technical fall against California-Santa Barbara's Wesley Peery before pinning Penn State DuBois' Deontay Wadley in 6:24 and earning a 13-3 major decision over Alfred State's Konnor Kremer to reach the semifinals, where he waited until late in the third period before Air Force Prep's Trace Carello in 6:35.

Also at 174, Flames freshman Sam Karel decisioned Temple's Eric Mongiello in his first-round match, 7-3, before coming up on the short end of a 17-6 major decision to Penn State Mont Alto's Clay Kocsis. Karel then defeated Zachery Woods of UMass by 15-3 major decision to set up a consolation quarterfinal matchup against Central Florida's Jarrod Smiley. Ferenczy will face Kocsis in Saturday's final.

Liberty junior Tyler Sigler, who has fought his way back from injuries this semester after missing most of last season due to injury, has started nationals on a roll, winning his first match by fall over Penn State's Jabel Warren in 4:18 before scoring an 18-2 technical fall over Wisconsin's Ethan Fitzler in 3:41 and earning a 6-5 decision over Zachary Alvarado of SCAD in the championship quarterfinals. He then met Maine's Brent Waterman in the semifinals.

Similarly, Flames sophomore 149-pounder Brandon Robinson turned heads of spectators and put opponents on their backs in impressive fashion to reach the championship semifinals. He needed just 49 seconds to pin his round of 64 opponent, Jeremy Nelson of Henry Ford College, before decking Tommy Herz in 6:19 and Maine's Tyler Everett in 56 seconds and scoring a 17-6 major decision over Texas' fifth-seeded Antonio Martinez in the quarterfinals. That set up a semifinal showdown with top-seeded Jeremiah Lutz, who needed just 39 seconds to pin Robinson.

Liberty freshman Ashton Robinson won his 133-pound opening match by 7-4 decision over Travis Starr of Grand Valley State. After losing a 6-1 decision to Penn State Fayette's Michael Perdomo in the championship round of 16, Robinson needed just 29 seconds to pin Kevin Evans of the University of Houston Downtown in his consolation round of 16 match.

At 149 pounds, Liberty senior Ike Podell, a returning All-American, experienced a similar start, winning his first match by 5-0 decision over Wisconsin's Hunter Weiss before dropping his championship round of 16 bout by a 3-2 count to Temple's Ryan Kemmerer. He bounced back to pin his consolation round of 16 opponent, Florida's Coll Robertson, in 6:30.

Flames freshman 157-pounder Andrew Burgette had an auspicious start to his first national tournament. He scored a 20-3 technical fall over Akron's John Iacano in Thursday's opening match before pinning Colorado State's Colin Saiz in 4:52 to reach the championship round of 16. There, Burgette dropped a 5-3 decision to The Apprentice School's Bryson Woody, the top-ranked wrestler who he had edged in the championship match of the Mid-Atlantic Conference tournament. Burgette stayed alive by winning his consolation round of 16 match against Richland College's James Moore by 16-0 technical fall to set up a consolation quarterfinal match with Texas Tech's Joseph Rios.

Dominick Johnson, Liberty's sophomore heavyweight who pinned his way to a MAC championship, picked up where he left off with a 32-second fall over Cal State Northridge's Mina Hanna. He then scored a 4-0 decision over East Carolina's Timothy Hudson before slipping to the consolation bracket with a 3-2 setback against Central Florida's Jesse Gaudin.

Liberty sophomore co-captain Taylor Westlake swept his way through to the 184-pound semifinals with a first-round pin of Montana Tech's Quincy Stormer in 1:01, a 3-1 decision over Central Florida's Randolph Prud'homme, and 10-1 major decision of Penn State's Paul Schoenberg. He lost to Emmanuel's Cody Chaney, 8-2, in the semifinals to slip to the consolation bracket.

Sophomore 184-pound teammate Josh McIlhenny lost a 14-3 major decision in his first-round 184-pound match before winning three straight in the wrestlebacks — by 6-2 decision over Bradley Louth of Rowan, a fall in 2:38 against Texas A&M's William Brown, and a 16-5 major decision over Iowa State's Cullin Brendeland — to set up a consolation quarterfinal match against Michigan's Brendan Rice. McIllhenny won that match by pin in 1:52 before being pinned by Grays Harbour's D.J. Morrow in 3:33.

Liberty 197-pound sophomore David Trigg pinned Auburn's Matthew Wall in 1:53 before dropping a 12-1 major decision to Ohio State's Kevin Slade. He recovered in time to score an 18-5 major decision over Florida State's Jacob Laursen before being pinned by North Texas' Luis Garcia in 4:57.

Also at 197, Flames junior Austin Amos recorded a 22-5 technical fall over Stony Brook's Jared Hudson in his opening match before winning a 12-6 decision over Temple's Ernest Tessein and being pinned by defending champion Emmanuel College's top-seeded Maveric Rechsteiner in 1:40. Amos responded by winning a 5-4 decision over Colorado State's Maxwell Furst to set up a consolation quarterfinal match against MIT's Joseph Lowman.

Senior 235-pounder Charlie Hancock started his tournament with a pin of Georgia's Jerry Holloway in 4:46 before pulling out a 3-2 decision over Grays Harbour's Brek McGaughy.

At 165, Liberty senior Patrick Scarborough won his first match by 18-2 technical fall to Stephen Illicete of Farmingdale (N.Y.) State before being pinned by Grays Harbor's James Jones in 3:55 and forfeiting his consolation match against Connecticut's Keith Brown.

Central Florida, which has three finalists, is right on Liberty's heels in the team standings with 132.5 points. Liberty has six wrestlers still alive in the consolation rounds compared to three for UCF. They are  followed by Grand Valley State with 110.5 points and Air Force Prep and The Apprentice School are tied for fifth with 85. Complete team scores and individual results are available on FloWrestling.com, which is also live streaming every match in the tournament.

Wrestling will resume with consolation quarterfinal matches at 9 a.m. Saturday before the championship finals are scheduled to start at 3 p.m.