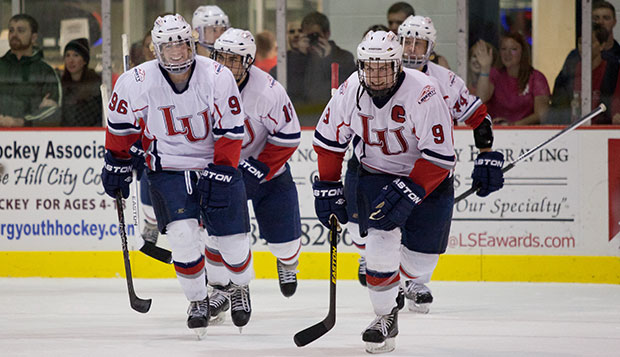 After breaking a six-game skid with a 4-3 win over then-No. 1 ranked Ohio University on Oct. 27, the Liberty Flames Division I men's hockey team looks to chalk two more to the win column this weekend as defending American Collegiate Hockey Association champion Delaware comes to town Friday and Saturday for a two-game series.

Both teams competed in the ACHA Showcase in Springfield, Ill., Oct 5-7, and interestingly enough, the teams both faced the same three opponents. The Blue Hens lost to Minot State 5-0 and Robert Morris (Ill.) 4-1 before defeating the Sooners of Oklahoma 4-1. Liberty lost all three of its games (read more).

Liberty Scouting Report: Liberty comes off a two-game split with Ohio at home, 2-3 and 4-3, respectively, on Oct. 26-27. Following the victory, the Flames will look to get some momentum after a few tough losses at home, including a pair to Davenport Oct. 19-20, which concluded with a disappointing shootout loss after last-minute Flames heroics forced overtime.

Rick Turner leads the Flames in points with 36 (21 goals, 15 assists) and is tied for the most goals in the ACHA for goals. Ryley Egan, second in team points at 22 (6 goals, 16 assists) is fourth in the ACHA in assists.

Delaware Scouting Report: The defending champion Blue Hens, similar to Liberty, have had a tough schedule to begin the year. Delaware has yet to play a game at home this season and currently is on a three-game slide after losing two road games to Rhode Island last weekend, 4-2 and 4-3, respectively. Before that, the Blue Hens had won three in a row, including a pair over West Virginia Oct. 19-20. This season marks the 40th anniversary of the program.

Christopher Volonnino and Mark Zeszut lead Delaware in points with 10 each. Volonnino has seven goals and three assists and Zeszut the inverse.