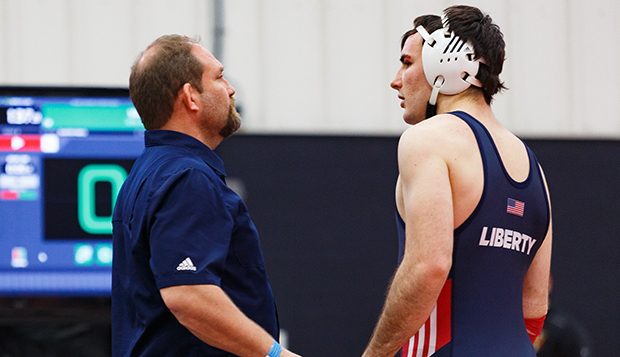 Sixteen members of Liberty University's wrestling team and its coaching staff gathered outside Doc's at 1 a.m. Wednesday — not to get a late-night bite to eat at the East Campus diner, but to catch a bus to Raleigh, N.C., where they took a red-eye flight to Dallas.

The Flames arrived with approximately 24 hours to prepare for the NCWA Grand National Championships, which started at noon (EST) Thursday and run through Saturday night at the Allen (Texas) Event Center. While the coaches targeted potential recruits at a wrestling combine held in conjunction with the tournament, the student-athletes used that time to run to get their weight down, work out in the weight room, and train on the mat in preparation for as many as seven matches over three days.

"We're clearly an underdog to win this thing, there's no doubt. But anything can happen," Flames Head Coach Jesse Castro said. "I'm encouraged, and we're excited about what's ahead of us here. We're looking for big things. We have an outside shot, with the help of a lot of other programs, to upset Emmanuel."

He said the challenge over the next three days will be a spiritual battle and psychological struggle as much as a series of physical tests.

"We're trying to instill confidence and a sense of preparedness in our guys," Castro said. "I like where we're at mentally, and physically, we've struggled with injuries all year long but we're fairly healthy right now. Our job is to maintain that and to keep sharpening them, to make sure they stay safe, healthy, and hone their skills so they'll be ready to compete. From here on out, it's a mental battle."

Besides Emmanuel, Castro expects Grand Valley State, Central Florida, and The Apprentice School — Liberty's top rival in the MAC — to be contenders for top-three team finishes.

"UCF is going to be a sleeper," Castro said. "They always perform well at the end of the year."

Senior 174-pound co-captain Josh Ferenczy, who went over 100 victories for his Flames career during the MAC tournament, will try to live up to his No. 1 seed and improve on his second-place finish from last season.

Junior 141-pounder Tyler Sigler, who has fought off injuries throughout the semester, and sophomore 149-pounder Brandon Robinson are seeded third and fourth, respectively.

While the Flames have two entries in five of the 11 weight classes, only the predetermined No. 1 wrestler's victories will count toward Liberty's team totals. Secondary competitors, including freshman Richard Cerebe who backs up senior Patrick Scarborough at 165 pounds and freshman Samuel Karel who complements Ferenczy at 174, can prevent opponents from scoring points for their respective teams.

Castro said Liberty's consolation matches will be equally important as its championship bouts.

Win or lose, Castro expects his wrestlers to demonstrate excellent sportsmanship while giving everything they've got on the mat.

"Our performance is a display of excellence that reflects Christ in us," he said. "There's a lot of truth behind competing for the glory of the Lord — not necessarily just having your hand raised, but performing in a way that reflects God's image, which is perfect."

Tournament action will be streamed live by FloWrestling for a fee.