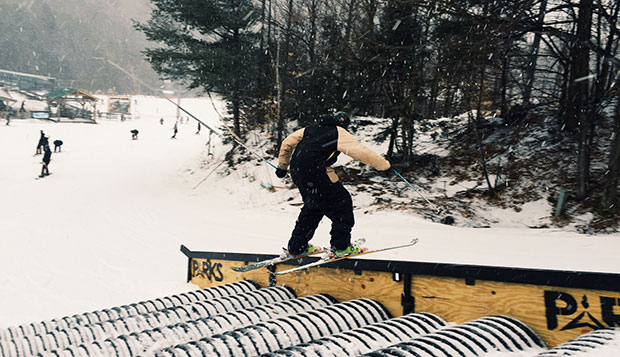 "We were hoping for higher placements than that, but we were happy that we were at least able to make it onto the podium (with a top-three team finish in the snowboard Rail Jam)," Flames Head Coach Ryan Leeds said, noting that the Rail Jam is probably Liberty's strongest freestyle event from training on Liberty Mountain Snowflex Centre's features year-round. "It's been snowing pretty much non-stop since we arrived on Saturday, accumulating over a foot every day, and it's going to keep snowing the rest of the week, so it's not ideal weather conditions."

Jonathan Wong was Liberty's only men's skier to make it into finals, and he placed seventh with a score of 66. Fellow Flames sophomore Isaac Shepard narrowly missed the cut, placing 13th with a score of 44 in a different heat.

"For skiing, the field was extremely strong," Leeds said, noting all of first-place Sierra Nevada's skiers advanced to the finals along with all of runner-up Vermont's and three of third-place Colorado Boulder's.

The Rail Jam set up offered two features in a row with a total of four options for riders to choose from in the first line and a wall ride and stall feature in the second line.

"This Rail Jam layout was a little more simplistic or basic, which leveled the playing field a little bit," Leeds said. "One thing our guys had to adjust to was the wall ride and stall feature at the end of the course. A lot of skiers and riders were spinning off the side of wall rides, which is something we need to work on."

The competition was a jam format allowing skiers and snowboarders 20 minutes of ride time per qualifying heat, allowing time for two or three runs per athlete in a field of greater than 36 riders in each event.

Wednesday's second day of competition showcases the ski and snowboard Slopestyle events, starting at noon (EST). The finals will be streamed live on the USCSA website.

Continued snowfall could make the Slopestyle course — which features two different jump options with bigger and smaller jumps — much more difficult to navigate.

"It's definitely going to affect speed and visibility," Leeds said. "It's definitely going to be an even playing field, but it's not ideal. We need to make sure our guys can adjust to the weather conditions. When there's a lot of fresh snow, it really affects your speed for those jumps. And these are not small jumps so you've got to get as much speed as you can get."

Conditions are reminiscent to the 2014 USCSA National Championships on Whiteface Mountain in Lake Placid, N.Y., when blizzard snowfall shortened the Slopestyle competition to one qualifying run per rider.