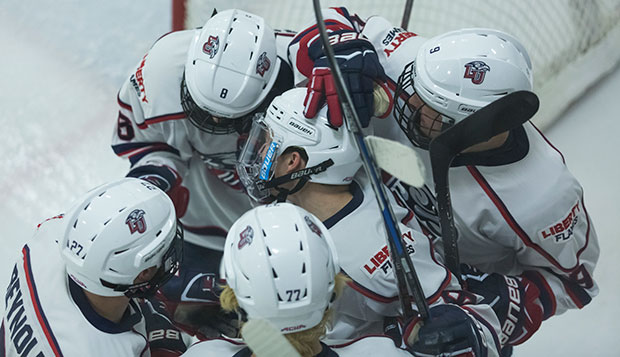 Liberty University's ACHA Division I men's hockey team embarked on the road to the National Championships in Columbus, Ohio, on Tuesday, seeking to complete a journey it started in September.

The Flames (29-12), who are making their ninth national tournament appearance in the 11 seasons since moving up from the ACHA DII level in 2006, are vying to become the 14th team in the 26-year history of the league — and 12th in the past 15 seasons — to capture an ACHA DI national championship.

"On any given day, any team can win," Flames senior center Grant Garvin said. "If we come to play and everyone buys in, works hard, and does all the little things — like blocking shots, taking a hit to make a play, and limiting turnovers — I believe we can beat any team."

Seeded 16th, Liberty will face 17th-seeded Colorado State in Thursday's 8 p.m. opening-round contest in the OhioHealth Ice Haus, the practice rink for the NHL's Columbus Blue Jackets located inside Nationwide Arena. It will be the first meeting between the Flames and the Rams since Colorado State defeated Liberty, 4-3, in the 2005 ACHA DII tournament.

"They're a hard-working team and they played a strong schedule this year," Liberty Head Coach Kirk Handy said of the senior-loaded Rams, who take a 18-15-5 record into their first DI national tournament after barely missing a bid the past three seasons. "Everybody plays all year to get into the tournament and everybody's got a chance to win in that one-game, winner-take-all format. Colorado State is a good squad so we want to make sure we execute well on Thursday night. I believe we'll be ready to go."

"There's lots of energy around our team," Handy said. "We believe in this group of guys and we've been working hard to be able to be in the national tournament. What we've got to duplicate is the effort and energy that we've had since the end of January, to play this playoff style of hockey that we've been playing and keep rolling."

Only the top 12-seeded teams at nationals received first-round byes, so in order for a 13th- through a 20th-seeded team to capture the crown, it must win five consecutive games in the single-elimination tournament.

"Obviously, we've just got to take one game at a time and that's the focus right now, playing 100 percent on Thursday night," Garvin said. "We'll practice up there on Wednesday, doing what we need to do as a team to prepare for Thursday and then, hopefully, if we win on Thursday, we'll do the same Friday and then for Sunday, Monday, and Tuesday."

The championship game is set for Tuesday at 7 p.m. in the Ice Haus. The complete tournament schedule is available online.

Garvin, Liberty's leading scorer for the second straight season with 21 goals and 25 assists, has received plenty of offensive support of late from the likes of freshman linemate Quinn Ryan (18G, 27A), sophomore defenseman Zane Schartz (18G, 24A), sophomore forward Owen Harris (15G, 16A), and freshman forward Josh Hamilton (15G, 15A).

"My line with Quinn and Brock Thompson has been playing well, but I've been most impressed with (Zechariah) Roberts, (Zak) Hayes, and Hamilton," Garvin said. "It's awesome to see another line producing for us. That opens all kinds of doors for both lines. I'd even say, in the NHL, it's not the top line or top two lines that make the difference, it's the third and fourth lines for the teams that are doing the little things that makes a good team and helps the team win. We need to pay attention to the details and have everyone doing the right things, everyone on the same page, working hard, working smart, and leaning on each other to perform. We're looking forward to having everyone come to play and everyone stepping up."

The Flames' DI squad is the first of three Liberty representatives in the ACHA National Championships, which, for the first year, are being played at one central location. The Lady Flames' DI women's program — winners of 16 of its final 17 regular-season games and ranked No. 1 in the final four ACHA DI computer polls — and Flames' DII men's team, which received its second consecutive autobid by finishing the regular season ranked No. 2 in the Southeast Region, will compete in their respective tournaments from March 15-19.

"It's exciting to have all the teams playing in one location," Garvin said. "I'm really looking forward to it." 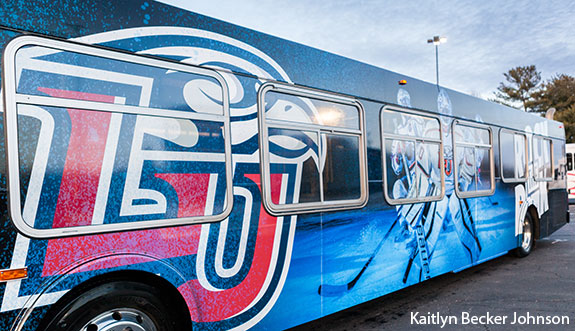 The Flames will look to 'Rock the Rink,'  as Liberty's bus suggests, at the National Championships.