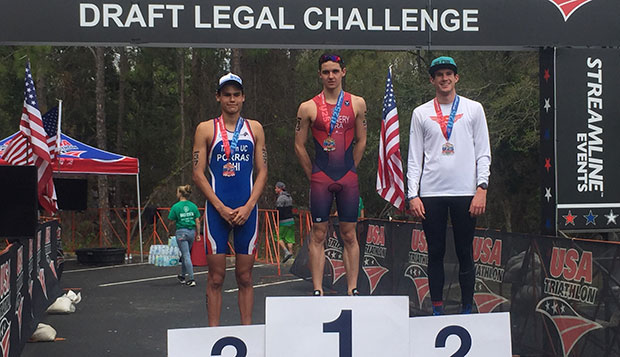 "It's one of the most competitive races in the country, and an elite status qualifier with the top three male and female finishers qualifying to turn professional," Spencer said. "It was a good chance for members of our team to get two races in back-to-back and to make sure their ready for the upcoming season. We're definitely getting more and more competitive and will be even more competitive next year, so it's exciting."

Thomas Sonnery-Cottet, a freshman from France, placed fifth out of 68 participants in Saturday's first U25 Elite Development Race in 59 minutes, 1 second before winning Sunday's second event in 58:15. He started that race with a time of 10:10 in the 750-meter swim in Lake Louisa, followed by a 30:20 time in the 20-kilometer cycling stage, and a 16:59 5K run.

Sonnery-Cottet will travel back to his homeland over spring break next week to compete for spots on the French team in this summer's Junior World Championships and European Championships.

"He's got a great shot," Spencer said. "His training couldn't be going better and he put out an amazing performance against guys who have already been to the junior world championships in the past. He put together a near perfect race."

Sunday's women's U25 race featured a couple medical emergencies involving Liberty competitors. Flames sophomore Greg Schott, who earned his EMT certification while training in Colorado last semester, was called on to administer CPR to a female triathlete from another school pulled from the water in extremely rough conditions for the swim.

"She was unconscious when they brought her onto the beach and couldn't find a pulse," Schott said. "It was literally right as we started she woke back up."

"He only had to do a couple chest compressions before she started spitting up water and was revived," Spencer added.

Then, Lady Flames senior Megan Merryman, who placed 21st out of 46 competitors in Saturday's first U25 Elite Development Race, broke her collarbone on a fall during the cycling stage after running into the back wheel of the rider in front of her.

"Megan had a really bad crash on the second day on the bike and they ended up airlifting her to the hospital," Spencer said Monday after Merryman had surgery on the broken clavicle. "The good news is it's a clean break and surgery will allow her to her recover and it will be a quick heal. She may have a mild concussion but they did a CT scan and everything checked out fine."

He said it is questionable whether Merryman will recover in time to compete for Liberty in her final USA Triathlon Collegiate National Championships in Tuscaloosa, Ala., in April.