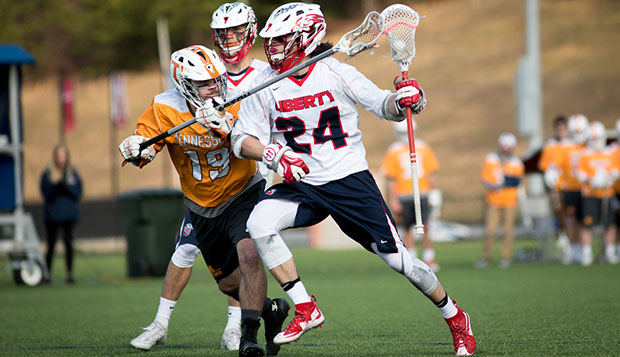 The Flames (2-1, 1-0 SELC Northwest), ranked 20th in this week's MCLA Division I poll, stemmed a second-half comeback bid by the Volunteers (1-4, 0-1), scoring the game's final seven goals in an 18-4 triumph at the Liberty Lacrosse Fields.

"We have a lot of talent on the offensive side of the ball and guys were able to have success today," Head Coach Kyle McQuillan said. "There were definitely some positives. We definitely moved the ball well, but we forced some passes that we didn't need to make and our transition game was non-evident."

He said the Flames ran their systems well at the start, but started getting away from the team concept as the lopsided game went along.

"We scored 18 points, but if I'm being really critical, there's a way in which we'd have liked to have scored those 18 points," McQuillan said. "Some of them came off of good offensive sets and discipline, but a lot of them came off of guys having success on an individual level rather than a team level. What we wanted to see was a little bit more of our offenses and running our systems instead of just individual play … because as our schedule continues to get more difficult, we're going to play teams that play very good and sound fundamental team defense."

Freshman attack Derrick Esh (two goals, three assists) sparked the Flames' offense in the first quarter, dashing from behind the right post before finishing a wraparound shot for the game's first score. Sophomore midfielder Chase Wright (2G, 2A) received a pass from freshman middie Carter Elliott (3G, 1A) and whipped a shot from the left side that skipped past Tennessee goalie Ben Kaemmerer for a 2-0 lead with 9:11 to go in the quarter.

Senior attack Nick Lombardozzi (4G, 2A) then took a feed from sophomore forward Sam Gregory (5G, 2A) and ripped a submarine shot from the right side for a 3-0 advantage with 4:19 left. Lombardozzi then received a pass behind the net 45 seconds later and sprinted from right to left before finishing with authority inside the left post.

After a Tennessee timeout, and a turnover on a clearing pass, freshman attack Caleb Britton set up Gregory for a quick fast-break finish from point-blank range. Gregory extended the Flames' advantage to 6-0 with a running shot that rattled off the cage and into the back of the net with 1:30 to go in the first before capping the quarter scoring off an assist from behind the cage from Wright with 7.2 seconds to go.

Lombardozzi sandwiched goals from the left side and a bounce shot from out front around Tennessee's first goal — nearly 20 minutes into the contest and the only score off Flames starting goalie Ryan Reynolds. Freshman attack Elijah Britton then finished an assist from Lombardozzi before Wright extended Liberty's lead to 11-1 with a spectacular shot from the left side that bounced over the head of Kaemmerrer.

The Volunteers scored the first three goals after halftime before Gregory ended the drought with the first of his three second-half goals 4:40 left in the third quarter. Elliott also had a hat trick in the second half, the last off an assist from Esh before Gregory received a feed from Esh and unloaded his fifth goal for the final score late in the fourth quarter.

"They came out at half and put three on us pretty quick and we realized that we needed to snap back," McQuillan said. "It's tough to stay dialed in and focused for an entire game, especially when you take that kind of a lead. But we still need to do a better job of being consistent and being the same team from quarter to quarter and half to half and from game to game."

The Flames will have a week off to prepare for their second road trip, a five-day spring break venture to Washington, D.C., where they will play Northwest Region rival George Washington on March 13 and Sonoma State on March 15 before traveling to West Virginia on March 17.

"We're looking forward to it," McQuillan said. "It'll be a nice change of pace and nice to commit and dedicate a full week to just being with the guys and kind of developing this team. We've just got to focus on, regardless of the opponent, being the same team from week to week. Michigan State was a lost opportunity and we definitely know that, but we've got a lot of future opportunities ahead of us."