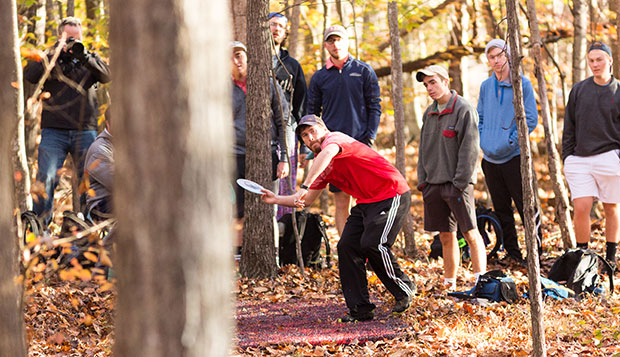 White earned a fourth-place finish in the advanced category of last Saturday's tournament, shooting rounds of 65 and 34 for a 99 total at the Timber Ridge course in nearby Bedford County. On that day, he finished behind sophomore teammates Hunter Thomas (55-32-87), the overall winner, and runner-up Shumate (57-33-90). It was the eighth and final tournament of a series that started in November.

Liberty graduate student Devin Swartz, who was the third-place amateur in the series with 199 points, took fifth place in the tournament (70-34-104) to hold off Thomas (169 points, fifth place) in the overall standings.

Flames sophomore Zach Biscardi captured first place in the Intermediate Division at Timber Ridge, shooting rounds of 64 and 31 to finish two shots ahead of freshman teammate and runner-up Christian Wilborn (64-33-97) and seventh in the overall standings with 147.5 points. Freshman Taylor Nicol (68-37-105) tied for sixth at Saturday's event.

With the National Disc Golf Association (NDGA) Collegiate Championships only five weeks away, Liberty, which placed seventh in the Championship Flight of last year's nationals, will travel to Wilkesboro, N.C., for a Tri-State Challenge match on March 25.