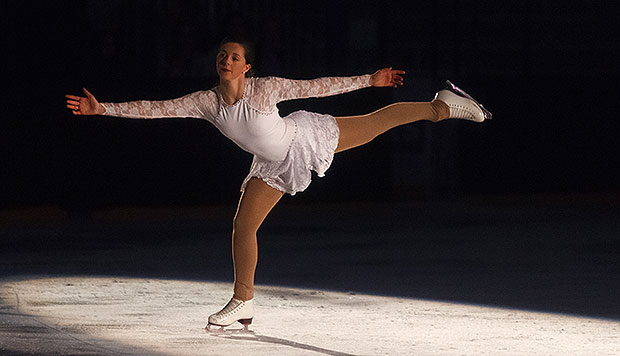 As Liberty University's figure skating team hosts its annual Eastern Sectional Intercollegiate Competition Friday through Sunday at the LaHaye Ice Center, Club Sports Video Coordinator Patrick Strawn interviewed sophomore Senior-level skater and Lady Flames co-captain Cami Burkhardt about what led her to continue her career at Liberty and how she uses the sport to share her faith.

Burkhardt, who is majoring in Exercise Science and plans to become a physical therapist working with athletes, was inspired by her older sister to start figure skating when she was 3 years old. She became more involved in the sport after her family moved from Ohio to Raleigh, N.C., and her career accelerated from there. A double gold medalist in Moves in the Field and Freestyle skating, Burkhardt is also a "National Theater On Ice" silver medalist as well as a repeat Eastern Great Lakes Region and South Atlantic Region qualifier.

She became the Lady Flames' first representative at the U.S. Figure Skating Collegiate National Championships in Pittsburgh before she officially arrived at Liberty for the Fall 2015 semester.

"The figure skating team is growing exponentially this year and I was really excited about the development and giving my hand in helping it grow," Burkhardt said.

Through her travels to regional and collegiate sectional events, she has tried to be a witness for Christ, reflecting His light and sharing God's grace with other skaters.

"Skating is pretty secular, all around the United States, so when we travel to competitions, people know there's something different about us," she said. "We are the hands and feet of Christ while we travel around and go to the competitions and we just really shine our light and give all the glory to Him."