Lowes reflects on season, looks ahead to ACHA DII nationals 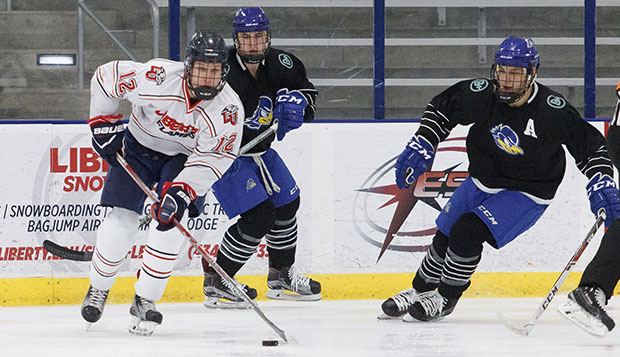 Senior forward Devon Docksteader and the rest of the Flames are gearing up for their fourth straight trip to the ACHA DII National Championships, set for March 15-19 in Columbus, Ohio. (Photo by Caroline Cummings)

By edging Penn State, 3-2, in overtime in the final at Delaware's Fred Rust Arena, Liberty got some valuable playoff-level competition in preparation for the March 15-19 ACHA Division II National Championships, to be played in Columbus, Ohio.

"The game against Penn State was great for us," Lowes said. "Coach (Mike) Morrison and I were talking said, win or lose, it was the best thing for us to have a tight game, face some adversity, and learn something about ourselves. I really think we're a work in progress still. The Penn State game exposed a few areas where we can get better. We're still on the road to becoming the team we want to be."

Though Liberty (26-1-1) hosted last weekend's Southeast Regional tournament, it didn't have to compete in that event after earning an autobid to nationals for the second year in a row by being in the top two in the final Southeast Region rankings. The Flames wound up second, behind only defending national champion Florida Gulf Coast University, which defeated Liberty, 4-1, in last year's championship game. Lowes would like nothing better than to reverse that outcome in this year's event.

"To win a national title is one of the hardest things to do," he said. "You somehow have to find a way to win five games against very good competition. It takes a combination of playing really good hockey, playing at your best, while also avoiding bad penalties and bad bounces. I look at this year's field and there's 16 teams at nationals and there's realistically 11 or 12 that I would not be surprised if won it."

In their pool play contests, held at The Chiller in nearby Dublin, Ohio, the Flames will face Keene State (N.H.) College, the third seed out of the Northeast Region, in the first round, on Wednesday, March 15, starting at 10:45 a.m. They will then take on Lindenwood (Mo.), the fourth seed out of the Central Region, March 16 at 11 a.m. before challenging Williston State (N.D.), the top seed out of the West Region, on March 17 at 7:45 p.m.

Liberty expects to have two of its top centers — graduates Danny Logan and Peter Kazmierczak — back from injuries that sidelined them for the last month of the regular season.