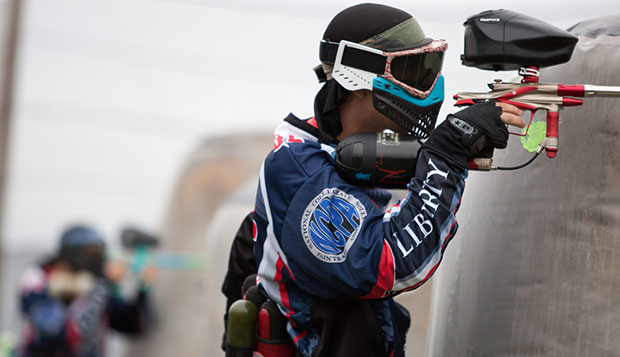 The Liberty Flames paintball team won three of four matches at home Sunday to open regular season play. With one day of action under its belt, Liberty is in a tie for first place in the Southeast Conference of the National Collegiate Paintball Association.

The Flames took on Kennesaw State in Sunday's opening matchup, losing 3-4. Liberty managed to jump ahead in the first 10-minute half, leading at the break 2-1 before the Owls took control of the game.

That would be the only time on Sunday Liberty found itself on the short end of the score sheet.

Liberty next faced the University of Tennessee, edging the Volunteers by a score of 5-4. The Flames led at halftime 3-2.

In a rematch with the Owls, Liberty took a 3-1 lead going into halftime and matched scores with Kennesaw in the second to earn the revenge win 4-2.

To conclude the afternoon, the Flames took on Tennessee once more. After one half of play, the two teams were locked up at 2-2. Liberty came out blazing in the second half, outscoring the Vols 2-1 and claiming a 4-3 victory.