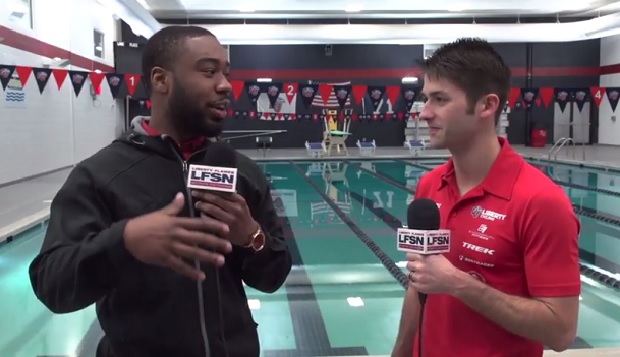 On this segment of "Coaches Club," Liberty University Club Sports Video Coordinator Gabe Henderson interviews Parker Spencer, who recently relocated from Richmond, Va., to serve on staff full-time as head coach of the three endurance sports: men's and women's cycling and triathlon and men's swimming & diving, which will debut this fall.

Spencer, a 2012 Liberty graduate with a degree in Exercise Science, said the Lord led him back to Lynchburg after working for Endorphin Fitness for the past few years.

"For my wife (Kristina) and I were very established in Richmond, had a great thing going there, but we both felt like God really wanted us to be here and I truly believe that we've got the ability to have national championships between all three teams," Spencer said.

He has recruited a roster of swimmers who can compete at a high level in the inaugural season in the new Liberty Natatorium, due to be completed by Nov. 1.

"We already have a handful of guys that could easily swim NCAA Division I that have decided to come here because of what Liberty has to offer and with our new facility that we're building," Spencer said. "It's exciting and I'm still pushing to get a couple more guys."

Meanwhile, he has motivated his cyclists and triathletes to push themselves through offseason workouts to prepare for the spring race schedules — which started this past weekend for cycling with the Bull City Grand Prix in Durham, N.C., and gets going this weekend for Liberty's top triathletes with the Clermont (Fla.) Draft-Legal Challenge.

"I really feel like we're going to surprise a lot of people, not just in our conference but nationally," Spencer said. "We've really improved by leaps and bounds over the offseason and our guys have been really focused. I've really been pushing them hard and they're definitely well prepared. I honestly think we've got a national-caliber team on our triathlon side."

He has been impressed with the work ethics of his underclassmen, including sophomore Adam Williams, who will join the Flames' elite squad to the trip to Florida.

"We've had a lot of freshmen that have really just come out of the woodwork and decided that this is what they want to put their effort in," Spencer said. "They've worked really hard. They've been some of the most dedicated athletes I've ever worked with."

Junior Jake King, who placed fourth at last spring's USA Cycling Collegiate Road Championships near Asheville, N.C., is primed for a run at a national title.

"On the cycling side, we definitely have some key players who will go to nationals and make a statement," Spencer said. "Jake King is just coming back from doing some training in France last semester and he won some big races while he was in France so he's looking stronger than ever right now."