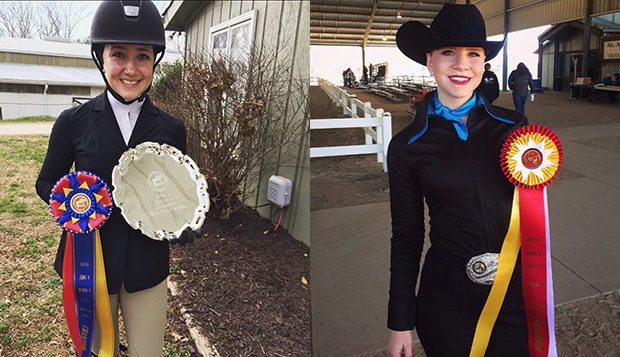 The Lady Flames' Hunter Seat team was awarded its team championship trophy, which it earned by winning seven of eight shows in the regular season, at the start of Saturday's event hosted by the University of Richmond. Senior captain Elizabeth Chenelle also received the Cacchione Cup trophy for being the high point open rider in the region, making her Liberty's first qualifying rider to the 50th annual IHSA Collegiate National Championships, set for May 4-7 at the Kentucky Horse Park in Lexington, Ky.

On Saturday at Richmond, Chenelle placed third in the open fences class, narrowly missing a berth to the Zone 4 competition. She then took second in the Open Flat division to qualify for the April 8 Zone 4 Finals at St. Andrews (N.C.) University.

Sophomore Morgan Faber, who rode for the Lady Flames as a freshman before transferring to VCU this past fall and returning to Liberty this semester, placed second in both the Novice Fences and Novice Flat divisions and will continue to the Zone 4 events in both.

Liberty will also compete in the "Collegiate Cup" team competition at the Zone 4 event after finishing as the high-point team in the regular season. One rider in each division will represent the Lady Flames in the five-team competition that will include East Carolina, Emory & Henry, Goucher, and Randolph College, which clinched its region Sunday with a win over Virginia. The top two teams at Zone 4 will secure entry into the National Championship team competition in Lexington, Ky.

It was also announced over the weekend that Liberty will host its first IHSA Hunter Seat shows next year at its recently expanded Liberty Equestrian Center. It will hold a regular-season event on Feb. 10 followed by the Regional Championships on Feb. 24.