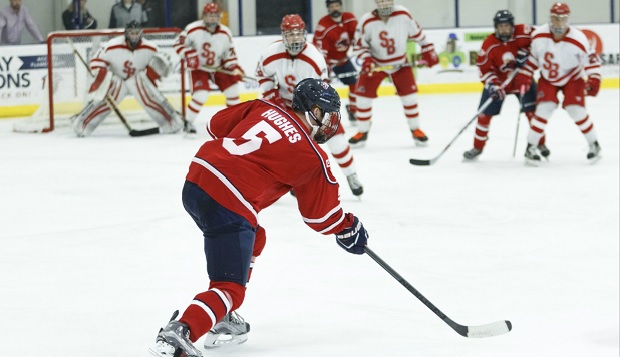 Entering the Eastern States Collegiate Hockey League (ESCHL) playoffs on a seven-game winning streak, Liberty University ACHA Division I men's hockey coach Kirk Handy knew the Flames had the potential to take their game to an even higher level than they reached in the final month of the regular season.

Though it didn't quite climb to the next plateau in the tournament's first two rounds — scraping by with 5-3 and 3-1 victories over West Chester and Rhode Island, respectively —Liberty peaked at the right time for Sunday afternoon's championship game, a 6-1 triumph over top-seeded, four-time defending ESCHL champion Stony Brook (25-10, ranked 12th in the ACHA DI poll) at Rhode Island's Boss Arena.

The second-seeded, 16th-ranked Flames (29-12) got two goals from senior center and team-leading scorer Grant Garvin and 40 saves from senior goalie Matt Pinel to stretch their winning streak to 10 games and capture the ESCHL crown in their inaugural season.

"That's huge for us," Liberty Head Coach Kirk Handy said. "They had won three out of four games against us in the regular season and it was a tough game, but our guys played hard and battled hard and we had something special going on today. It was a real solid effort. It's been nice seeing our young guys grow up and really mature over the season and it's a great thing for our first year in the ESCHL to have the conference title."

The Flames' balanced attack was complemented by a strong overall performance from sophomore forward and tournament MVP Zak Hayes.

"He had a fantastic tournament," Handy said. "He blocked shots and played a real solid game for us."

Special teams was the deciding factor in the Flames' favor in the championship game. Although Stony Brook held a 41-34 shot advantage, Liberty scored four power-play goals and its penalty kill unit didn't allow a single score in the contest.

"Our PK was fantastic today," Handy said. "They played awesome. Our defensive corps as a whole played well in front of Matt in goal."

Liberty started the scoring just 30 seconds after the opening faceoff when freshman forward Brock Thompson caught Stony Brook's goalie off guard with a snipe of a shot from the outside.

The Flames added their first two power-play goals within a span of just over a minute midway through the first period, the first off the stick of freshman forward and second-leading scorer Quinn Ryan. He capitalized on assists from third-leading scorer Zane Schartz and Thompson before Garvin converted his first goal for a 3-0 advantage with 10:36 to play in the opening stanza.

Following a scoreless second period, freshman defenseman Matt Cruickshank extended Liberty's lead to 4-1 at the 18:17 mark of the third by launching a shot from the point that found the back of the net.

The Flames cashed in on two more power-play goals — by freshman forward Josh Hamilton from out in front with 15:55 remaining in regulation and by Garvin on a putback with 1:58 to go — to put the championship on ice.

Liberty has less than two weeks to prepare for its ninth trip to the ACHA DI National Championships, March 9-14 in Columbus, Ohio. The Flames, seeded 16th, will challenge 17th-seeded Colorado State in the opener, set for 8 p.m. on Thursday, March 9.

"We'll rest up and get ready to go into nationals (because) we're just going to have to work harder there," Handy said. "We've worked hard to get to this point and we've got to keep working hard. We aren't satisfied with where we're at. We're going to take our game to the next level heading into nationals."