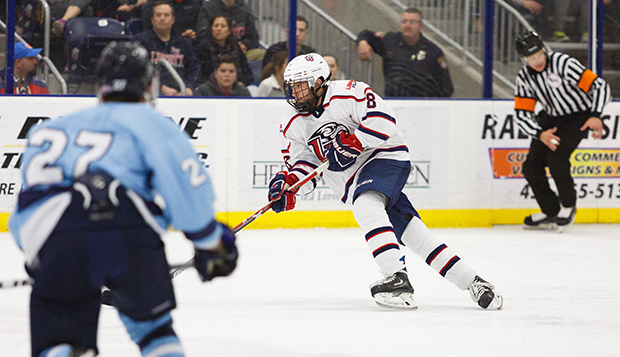 The 17th-ranked Flames (28-12) beat the Rams for the fifth time this season to advance to Sunday's 2 p.m. championship game, where they will challenge top-seeded, defending tournament champion Stony Brook (25-9, ranked 12th in the ACHA), a 3-2 last-minute semifinal winner over Rutgers.

"It was a back and forth game and it was a physical game," Flames Head Coach Kirk Handy said. "Rhode Island played well and that's going to be a strong team to play next year. All the games we played with them were basically one-goal games, including tonight, until we got that empty-netter at the end. These are all playoff games, so you're not going to blow teams away. These are going to be tight games, and it's important for us to learn how to win these tight games. Our guys battled hard tonight."

Sophomore defenseman Zane Schartz ended a scoreless tie with 24 seconds remaining in the first period to give Liberty a 1-0 advantage heading into the first intermission. After killing two penalties in the second, the Flames gave up the equalizer with 6:45 to go in the period, before and after spectacular saves by senior goalie Matt Pinel.

"Matt made some big saves for us," Handy said. "He played well and gave us an opportunity to win. We didn't have a very good second period, but credit to our guys, they came out in the third and played really well. Our penalty kill was very strong tonight."

After killing off a five-on-three that spanned the second and third periods, Flames freshman forward Josh Hamilton netted the go-ahead goal at the 16:07 mark of the third on a rebound of a slap shot off the stick of sophomore forward Zak Hayes, who added the empty-netter in the closing minute.

"(Sophomore forward Zechariah) Roberts, Hamilton, and Hayes was a very solid line for us tonight again," Handy said. "I felt like some of the other guys were unseen heroes, guys on the back end like (freshmen) Basil Reynolds and Chaydan Lauber played well defensively. Our whole defensive corps was pretty solid for us."

Overall, Handy knows it will take an even stronger effort for the Flames to upset the Seawolves — a team that won three of the teams' four regular-season meetings — in Sunday's final.

"We haven't played a 60 minute game here at this tournament and tomorrow it will be imperative to compete for 60 minutes," he said. "It'll be a great matchup, a great battle between two teams going to nationals."