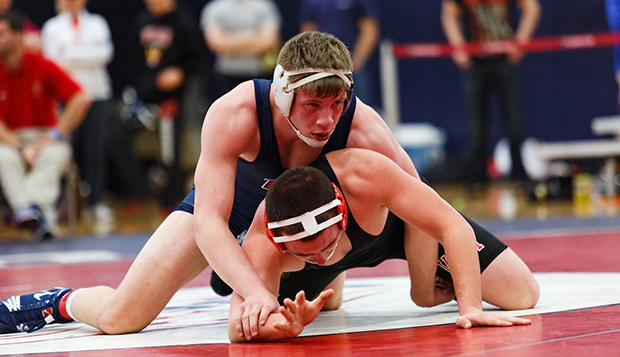 Senior 174-pound captain Josh Ferenczy became the ninth individual in the history of Liberty University's wrestling team to reach the 100-win mark with a pin of JMU's Conner Wrann in 3 minutes, 53 seconds and sophomore Dominick Johnson recorded four falls on his way to the heavyweight championship to lead the Flames to their sixth consecutive Mid-Atlantic Conference (MAC) tournament title, Saturday at the LaHaye Multipurpose Center.

"That's a very good number," said Flames Head Coach Jesse Castro, who was selected the MAC Coach of the Year. "I was hoping for 15, so we'll take 16. That was awesome. I'm really proud of the guys. If we can take what we did here into the national tournament with the kind of confidence that they wrestled with here today, I think we have a shot at this thing."

Liberty racked up 207.5 points to win without much contention from runner-up Apprentice School (166) or third-place Middle Tennessee State (130.5) in the 12-team field.

"That was our goal, to come in here and dominate," said Flames sophomore Brandon Robinson, who won his first three matches by first-period pin before edging South Carolina's Jackson Meyers, 3-2, in the 149-pound final. "That's the icing on the cake right there. I just listened to what Castro said, to just go out there and pick and choose my shots and stick to my offense. As long as I keep my feet moving and I keep trying to score, the outcome should be good."

At 157 pounds, Flames freshman Andrew Burdette upset Apprentice's top-seeded Bryson Woody, the No. 1 wrestler in the NCWA rankings, 9-8 in a back-and-forth championship semifinal match that featured a number of takedowns on the edge of the mat.

"That was crucial," Castro said. "That was a big win for us."

Besides Robinson, Ferenczy, who received a first-round bye and won his last two matches by forfeit, the last over freshman teammate Sam Karel in the final, and Johnson — who pinned Middle Tennessee State's Nik Mcguiggan in 2:14, Tennessee's Robert Shofner in 4:43, William & Mary's Kyle Pederson in 6:06, and Apprentice's second-seeded Steven Francisco in 6:38 in the final — the Flames other champions were senior Patrick Scarborough, who won by forfeit over freshman teammate Richard Cerebe in the 165-pound title bout, and sophomore co-captain Taylor Westlake, who earned an 8-4 decision over JMUs Brian Sakalas in the 184-pound final.

"I really just want to thank Jesus Christ for giving me peace throughout the whole day," Westlake said. "The finals match was definitely the hardest one. (Sakalas) was a very technically sound wrestler and the coaches got me through it. They are really good at giving you advice from the corner about staying in good position and trusting in all of the training and drilling and practices you've had over these past four or five months."

"I'm really excited about nationals," added Westlake, who placed ninth at last year's event in Kissimmee, Fla., where the Flames came in fourth as a team. "My goal this year is All-American. I want to finish in the top five at least, so we'll see what happens."

Robinson, who joined the team mid-season last year and qualified for nationals, also has higher aspirations this time around.

"Everyone wants to win as a team and we have certain individuals, myself included, who want to come back home with some hardware, definitely," he said. "Last year, I ended up placing seventh, which wasn't too bad, but not what I wanted. I'm definitely striving for more."