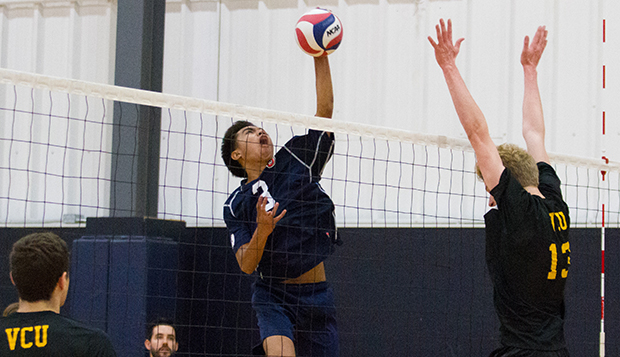 Josh Talamoa, a left-handed outside hitter, started his Flames career as a freshman on the indoor volleyball team last season.

On this week's segment of "Keepers of the Flame," Josh Talamoa, a sophomore on Liberty University's men's beach volleyball team, shares his favorite passage of Scripture, found in Philippians 3:10-12:

"That I may know Him, and the power of His resurrection, and the fellowship of His sufferings, being conformed to His death, if, by any means, I may attain to the resurrection from the dead. Not that I have already attained, or am already perfected, but I press on, that I may lay hold of that for which Christ Jesus has also laid hold of me."

Talamoa, who grew up playing indoor and beach volleyball in Hawaii, is studying in Liberty's School of Aeronautics, training to fly drones as a Professional Unmanned Aerial Systems Operator.

He meditates on these verses to walk in Jesus Christ's steps, both on and off the sand courts.

"You want to be closer to God and you want to grow with Him and walk with Him and you really want to know Who Christ is and what He died for and what our purpose, according to His plan, is for us," Talamoa said. "It's just cool to see how I have grown since I've come here and I'm just excited to know more about Christ and to draw closer to Him."