No. 2-seeded Flames to face West Chester in ESCHL opener 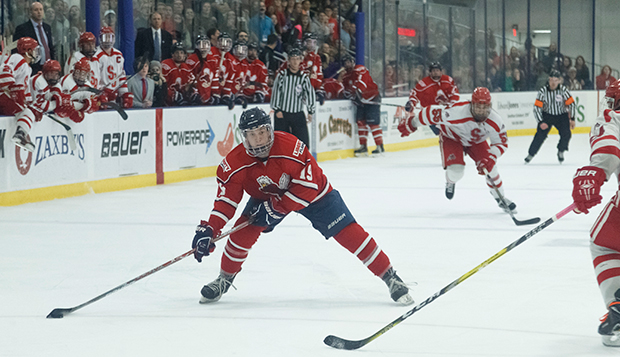 Knowing it has already qualified for nationals takes some of the pressure off Liberty University's ACHA Division I men's hockey team going into this weekend's Eastern States Collegiate Hockey League (ESCHL) tournament at the University of Rhode Island's Boss Arena.

But Flames Head Coach Kirk Handy wants his young team to approach the tournament — its first since joining the league a year ago this week — with the same sense of urgency and win-or-go-home approach that it will need going into the March 9-14 ACHA DI National Championships in Columbus, Ohio.

"We're really looking forward to it," Handy said. "We haven't played in a conference for quite a few years now, and to get back into that will create a great environment for us to play in. We need to make sure we establish ourselves early in these games."

"It definitely creates a playoff mentality before nationals," added senior goalie Matt Pinel, who has played the majority of minutes between the pipes for the Flames this season, going 13-9 with a 3.21 goals-against average and an 89.8 save percentage.

Liberty (26-12), seeded second, will face fifth-seeded West Chester (8-21-3) in Friday's 4 p.m. opener, with the winner playing the winner of the second matchup between Rhode Island (17-11-7) and Rutgers (12-15-1), Saturday at 7 p.m.. If they can advance to Sunday's 2 p.m. championship game, the Flames could challenge top-seeded Stony Brook (23-9), which will first face the Rutgers-Rhode Island loser in Saturday's semifinal round.

Handy said this weekend's ESCHL tournament will be an excellent tune-up for nationals, with playoff-level intensity expected as the six teams contend for a championship.

"I love the format of playoffs," he said. "Before we were in a conference, playoffs only meant nationals. Now, it means conference and nationals, which I think is a huge advantage for us. We're going to use this as the same opportunity as we would nationals. We're going to go in there and give everything we've got and work hard to see our team be successful this weekend."

"We've been saying since Day One, all of the conference games have a little more added punch to them than just the regular games, so we're looking forward to playing West Chester," Handy said. "We're focused one game at a time, so we need to take care of West Chester on Friday."

The Flames played their first ESCHL action against the Golden Rams, a Sept. 23-24 sweep at the LaHaye Ice Center. That series was capped by an 8-2 triumph that featured a hat trick by freshman forward Quinn Ryan, his first points at Liberty, and four assists by leading scorer Grant Garvin (19 goals, 25 assists, 44 points, fifth most in the ESCHL). Ryan (17G, 25A) totaled eight goals and four assists over the Flames' final four games to move into second place among the team's scoring leaders (seventh in the ESCHL) with 17 goals and 25 assists. Defensively, Liberty is led by sophomore Zane Schartz, who is also its third-leading scorer (16G, 23A, ninth in ESCHL), senior captain Ben Hughes, and freshman Matt Cruickshank.

Handy said for the Flames to come away with the tournament championship, they must get consistent contributions across the board, and not expect one or two players to lead the way.

"We're going to continue doing what's made us successful and that's hard work, working together as a team and pushing ourselves and pushing each other to be the best we can be," Handy said. "We can't have a few guys working hard. Everyone has to be in the same boat, paddling in the same direction, working hard, and giving ourselves the best opportunity that we can to be successful this weekend."

The Flames take a seven-game winning streak into the postseason, including back-to-back sweeps of ESCHL rivals Rutgers and Rhode Island.

"It's still important to build momentum and win these games," Pinel said. "We just need to stick to the system, forecheck hard, and play our game like we have been the last few weeks. Hopefully, we can just keep rolling."

"To see our team game go to another level has been encouraging to us," Handy added. "There's still room for improvement, still room for growth, and we're going to keep pushing the guys. We're still hungry to improve and grow and get better as a team and that's what this weekend's all about — taking our team game to the next level. We know that there's another level that we've got to get to and we're going to get to it this weekend."