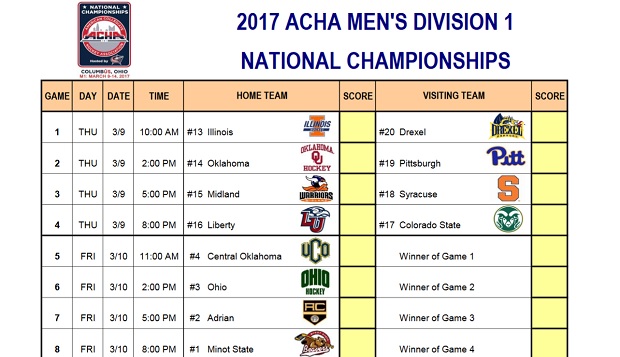 By winning its final seven games of the regular season, Liberty University's ACHA Division I men's hockey team clinched its ninth ACHA Division I National Championship bid in the 11 seasons it has played at that level.

For the first time, all five ACHA national tournaments — DI, II, and III men and DI and II women — will take place in the same location, Columbus, Ohio, from March 9-19 starting with the DI men from March 9-14. Liberty's DI women, ranked first in the nation, and DII men, ranked second in the Southeast Region, will compete from March 15-19.

Three of the six ACHA conference regular-season champions who received autobids — Northeast Collegiate Hockey League champion Syracuse (seeded 18th), College Hockey Mid-America champion Pittsburgh (seeded 19th), and Eastern Collegiate Hockey Association champion Drexel (seeded 20th) — were not ranked in the top 20 in this week's final regular-season ACHA DI rankings but replaced No. 19 Colorado State, No. 20 Arizona, and No. 21 Rochester in the 20-team field. Liberty remained ranked at No. 18 but earned the tournament's 17th seed due to No. 7 Jamestown (N.D.) not being eligible for nationals in its first season in the league.

"Last year, we got bumped out (by a team receiving an autobid)," Head Coach Kirk Handy said. "This year, we're in. We're not really focused on who we're playing so much as how we are playing. That's the big thing game in and game out, what are the little things that we're doing. That's our top priority."

If Liberty can get past Colorado State, it will advance to face top-seeded, 2013 national champion Minot State in the second round on Friday, March 10, at 8 p.m. The Flames lost their last two meetings with the top-ranked Beavers in their 2016 season finales, the last in overtime.

View the entire ACHA tournament bracket and list of previous national champions and tournament MVPs on the ACHA webpage.