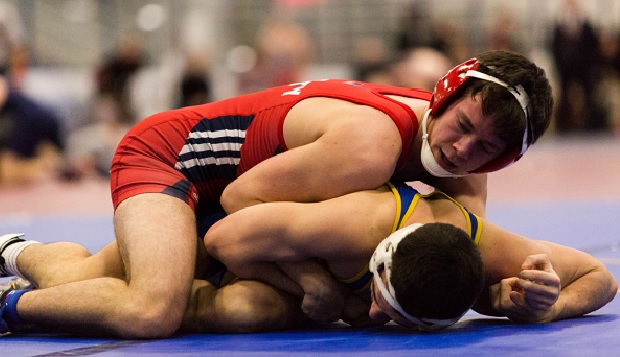 As five-time defending champion of the Mid-Atlantic Conference (MAC) Tournament, Liberty University's wrestling team could face its biggest challenge to the crown to date when it hosts the 12-team event Saturday starting at 9:30 a.m. at the LaHaye Multipurpose Center.

The Flames, the No. 2 team in the nation in this week's NCWA Rankings, will be tested by fifth-ranked Middle Tennessee State and sixth-ranked Apprentice School in a field that also includes talented wrestlers from JMU and Bridgewater as well as VMI. (The Mid-Atlantic Conference includes NCWA schools from Kentucky, North Carolina, Tennessee, Virginia, and West Virginia.)

"Last year it was the second strongest conference in the country," Liberty Head Coach Jesse Castro said. "This year, with a couple more teams (ranked), it may be the strongest. It'll be a good race. As far as I've seen, this is the best team Apprentice has ever had. We beat them at the Virginia Duals, but it was a good match."

As much as it wants to continue its streak of MAC tournament titles, Liberty is seeking to qualify as many wrestlers as possible for the March 9-11 NCWA Grand National Championships in Allen, Texas, with top-five finishes in the 11 weight classes.

The Flames have claimed seven individual MAC champions three times — in 2012, 2014, and 2015, the year Liberty won both the NCWA National Duals and NCWA Grand National tournaments. Liberty had six in 2013 and five last season, a number that may be more attainable on Saturday for a team that has lost some of its top wrestlers for various reasons in recent months.

Not having a 125-pound wrestler won't hurt Liberty as much as it did in the NCWA National Duals, where it finished runner-up to defending champion Emmanuel College.

Castro expects to be in contention for individual titles in every weight class starting with 149.

Senior captain Josh Ferenczy (24-5) is ranked first at 174 pounds and needs three victories on Saturday to eclipse the 100th of his Liberty career. If he can reach that mark, he will be one of only nine wrestlers in program history to do so and the first since Chad Porter accomplished that feat in 2011, Liberty's last season as an NCAA Division I program.

"The middleweights brackets will be really tough and people are going to be fighting to get out of there, to qualify for nationals," Castro said. "The 157 weight class would be probably the toughest, but we have two pretty strong wrestlers there — Andrew Burgette and Jacob Brooks. Then at 165, we have three who could make it — Cerebe, Scarborough, who's nursing an injury, and Luke Ely, a freshman who's going to surprise some people."

Amos and Hancock could run into Middle Tennessee wresters ranked second and third in the country, respectively — Sean Kennedy at 197 and Richie McClendon at 235.

In the lower weights, the Flames will look to freshman Ashton Robinson at 133 and junior Tyler Sigler, who's 11-1 and ranked first at 141 but has battled through injuries lately, and a possible return of All-American senior Ike Podell at 149.

The Flames will need to have at least a dozen qualifiers to be a legitimate contender at next month's NCWA Grand National Championships, with 23 bonus points from their second-place showing at the National Duals.