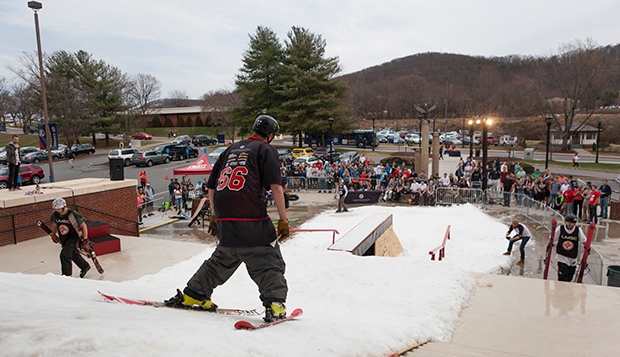 Holding the annual College For A Weekend (CFAW) Rail Jam on the steps of DeMoss Hall drew more than 200 spectators to Saturday's finals to witness 10 men's snowboarders, 10 men's skiers, and five women's snowboarders performing tricks on three features — one box and two rails from the Liberty Mountain Snowflex Centre on tons of snow trucked in from Wintergreen Resort.

"Bringing the event back to DeMoss brought a much larger crowd than what we've seen when we've held it behind the LaHaye Ice Center," Liberty Head Coach Ryan Leeds said. "It was an enjoyable event to watch and all the athletes were saying it was one of the better setups we've had in a while."

Men's riders had 25 minutes to perform as many runs as they could and were evaluated by three judges on their overall impression, determined by who had the most consistently clean landings, factoring in technical difficulty and style of the tricks performed.

"He displayed the most versatility in skiing," Leeds said of Steltzer. "A lot of people tend to spin onto a feature one way, and when they go the opposite, it's called spinning in an unnatural way, which involves higher technicality, and (Steltzer) did that more often than anyone else."

It was the first time in several years that Steltzer's brother, Tim, another Liberty graduate, did not land on the podium for a top-three finish, according to Leeds.

Women's snowboarders had 15 minutes to perform their tricks and Kaleigh Smith and Kelsey Smith, riders from the University of Virginia, finished first and third, respectively, around local competitor Bethany Waller, a student at Heritage High School in Lynchburg.

"It was a pretty good rail set up and seeing that our team is more technical on rails, it definitely suited our abilities," Leeds said. "We clearly won the competition, but it was not a blowout like we normally do in those events against Southeast teams and the competition for second and third place was really close."

"Judging was similar to USCSA competitions with the judges having the same credentials," Leeds said. "Whoever was the most consistent and landed the most technical runs received the top scores."

Those 10 team members will be joined by junior snowboarder Garrett Long, junior skier Andrew Garofalo and freshman skier Christopher Yablonski for the trip to Mt. Bachelor in Bend, Ore., for the March 5-11 USCSA National Championships. 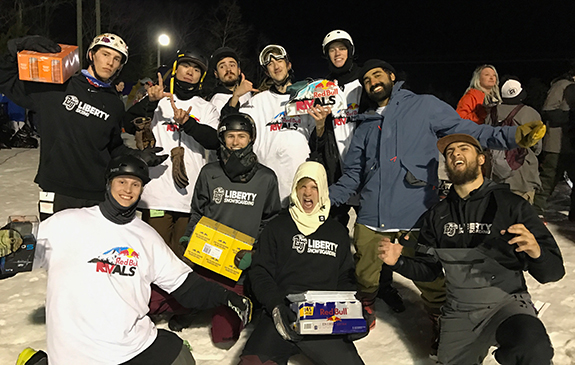