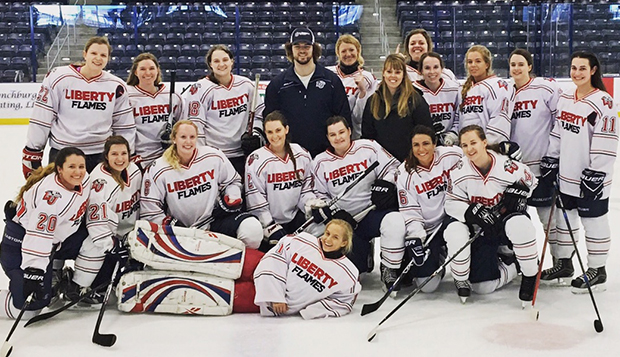 The Lady Flames (7-13) defeated RIT by a 15-1 count on Saturday, setting a program record for goals in a game, before prevailing by a 14-1 score Sunday to finish the season ranked sixth in the nation out of 41 ACHA Division II teams in scoring with 92 goals. Liberty finished .500 (6-6) at home, outscoring its guests by a 78-46 margin.

"Everyone contributed points this weekend," Lady Flames Head Coach Sara Niemi said after her team netted 29 goals on 75 shots. "Every player on our team got at least one goal and 2 points this season, including our goalie, (junior) Faith (Gerber)," who assisted two of Liberty's final three goals on Sunday.

Senior forward Kjrstin Hoberg netted a hat trick on Sunday and contributed four goals and three assists over the weekend to move into the top 10 in the nation with 36 points (26 goals, 10 assists).

Gerber made 29 saves in two games over the weekend, allowing just two goals and finishing ranked 14th in the nation with an 89.3 save percentage.

However, Liberty wound up fifth out of eight teams in the final College Hockey East (CHE) standings, missing the league's playoffs by one place. The Lady Flames will find out this week where they stand in the final ACHA DII rankings.

"We will probably be a few spots shy of qualifying for nationals this season, but definitely looking to secure a spot next year," Niemi said. "We had a very successful year and the development of the team has paid off this season."

Liberty honored four players competing in their final games for the Lady Flames this past weekend — Scales, Davis, Douglas and Price.

"These four players had such a positive impact on our team," Niemi said. "Their dedication to our program showed in their leadership, their passion for progression, and their resilience this season. I am so proud to have coached them during their college years and I am excited to see how they will impact the world in the future."