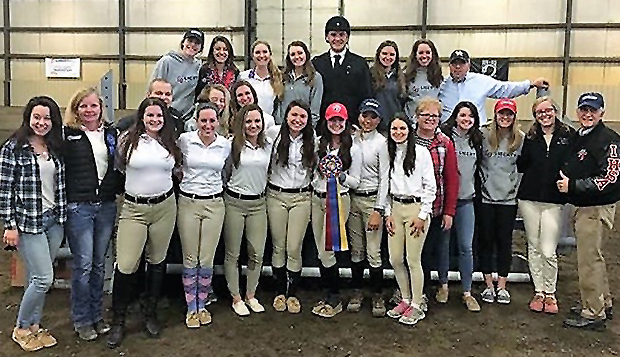 Members and coaches of Liberty's Hunter Seat equestrian team pose with Bob Cacchione, the IHSA's Executive Director, who was on hand to see the Flames clinch their first regional championship, Sunday in Fredericksburg.

In its first season competing in Region 4, Liberty University's Hunter Seat equestrian team clinched its first-ever regular-season championship over the weekend at shows hosted by the University of Mary Washington. Senior captain Elizabeth Chenelle captured the Cacchione Cup championship as the region's high-point scoring rider for the entire season, giving her a bye past the Zone 4 competition and making her Liberty's first rider to qualify for the 50th annual IHSA Collegiate National Championships, held May 4-7, Kentucky Derby weekend, at the Kentucky Horse Park in Lexington, Ky.

Liberty maintained a small lead going into the season's final two weekends and built on it in the first three of its final four shows, running its regular-season winning streak to seven in Saturday's first event in Fredericksburg, Va.

Sunday's show went to the final class before Liberty slipped a point behind the College of William & Mary for its first defeat of the regular season. Liberty, which finished first in the overall team standings ahead of runner-up Mary Washington, will receive its Regional Champion team ribbon at this Saturday's Regional Finals in Richmond, where it will be represented by Chenelle and sophomore Morgan Faber.

In addition to Chenelle, big winners for Liberty on the final weekend included sophomores Ryan Wambolt and Kendall Burdette, who both won blue ribbons for their third consecutive shows.

By winning the region, Liberty qualified to send its complete team to the Zone 4 Championships hosted by St. Andrews (N.C.) University on April 1-2. It will enter one rider in each of eight divisions to compete against four other regional championship teams, with the top two advancing to the IHSA National Championships. Emory & Henry College, Goucher College, and East Carolina University also clinched their regions this past weekend to qualify for the Zone 4 Championships while the Central Virginia region features a tight three-team race between Bridgewater College, the University of Virginia, and Randolph College, which will be decided next weekend in Charlottesville.