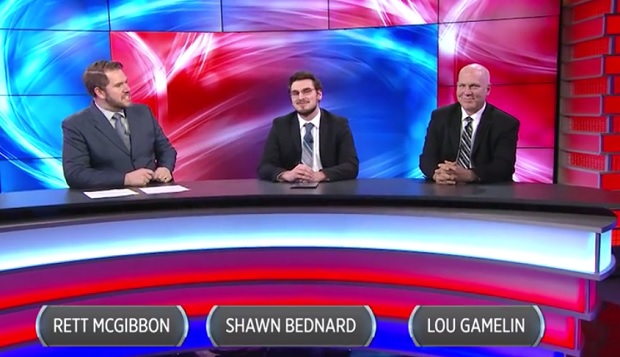 Liberty Flames Sports Network anchor Rett McGibbon hosted the ACHA Division II and Division III Reveal Shows out of the LFSN studios this past week after the final rankings in those leagues determined the seedings for regional tournaments and automatic bids to the March 15-19 and March 14-18 National Championships, respectively, in Columbus, Ohio.

McGibbon was complemented by Sean Bretherick and Bret Leuthner on the DII program and by Shawn Bednard and Lou Gamelin on the DIII show, 30-minute programs that were featured on the ACHAHockey.org website.

The DII Flames (25-1-1) received one of two autobids out of the Southeast Region after finishing ranked second behind only Florida Gulf Coast, the team that upended them in last season's ACHA DII championship game.

Though it won't be in the tournament, Liberty will host next weekend's Southeast Region playoffs at the LaHaye Ice Center. No. 3 Toledo, which dealt the Flames their only loss this season in the final game of the Liberty Showcase on Nov. 20, will be among eight other teams in the field vying for the last two national berths along with No. 4 Miami-Ohio, No. 5 Penn State, No. 6 Cincinnati, No. 7 Ohio, No. 8 Louisville, No. 9 Rowan, and No. 10 UMBC, which Liberty defeated in Saturday's South Division final of the Mid-Atlantic Collegiate Hockey tournament.

Liberty's DIII men are seeded seventh in the South Regional at Florida Hospital Center Ice in Wesley Chapel, Fla., and will face sixth-seeded UNC Wilmington in Friday's opener at 3:15 p.m. Other first-round matchups pit No. 3 Georgia versus No. 10 Mississippi at 3 p.m., No. 5 South Carolina against No. 8 South Florida at 5:30 p.m., and No. 4 Central Florida versus No. 9 Kennesaw State at 5:45 p.m. Saturday's finals will feature the second-lowest seed to advance against the second-highest seed at 11 a.m. before the highest- and lowest-seeded finalists will meet at 1:50 p.m.

Florida Gulf Coast and Tampa locked up the South Region's autobids into the ACHA DIII nationals.