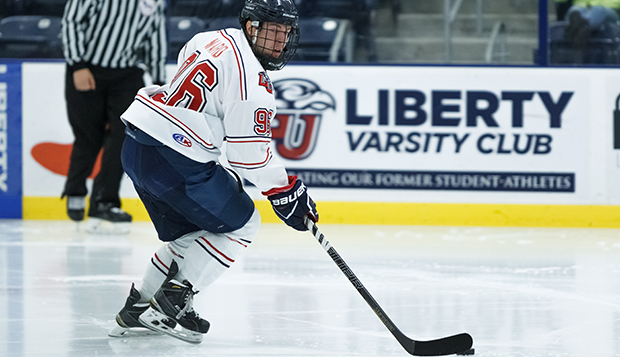 Junior forward Robert Ward scored three straight goals — one shorthanded, one at even strength, and one on a power play — to give Liberty University's ACHA Division II men's hockey team some separation in Saturday's South Division bracket final of the Mid-Atlantic Collegiate Hockey (MACH) playoffs, an 8-2 triumph over UMBC at Delaware's Fred Rust Arena.

The Flames (25-1-1, ranked No. 2 in the final Southeast Region poll) broke open a 2-1 contest after the first period by netting two goals in the second and four more in the third against the 10th-ranked Retrievers (11-15). Liberty outshot UMBC 48-22.

"They lost their starting goalie to injury (Friday) and they battled really hard," Liberty Head Coach Chris Lowes said. "They gave it their all and it was a tight, hard-fought game for a while. We killed a five-on-three in the second period that was real important and (goalie Jarrett) Epp stopped a penalty shot by (MACH) league MVP Ryan Atkinson before we finally opened the floodgates."

"That line showed a lot of chemistry," Lowes said, noting that after Blomberg opened the scoring off assists from Freymond and Sam Hisey, Freymond finished a feed from Docksteader for a 2-1 lead.

That set the stage for Ward, playing on the same line with graduate forward Tyson Street and junior Tim Bierema. His first goal came with the Flames on the penalty kill, after intercepting a long Retrievers pass in the slot and finishing top shelf.

Ward then put away assists from senior forward Jordan Barstead and senior defenseman Daniel Huntington before capitalizing on power play feeds from Freymond and Docksteader.

Liberty will play Penn State, a winner over Rider in the North Division final, Sunday at 4 p.m.