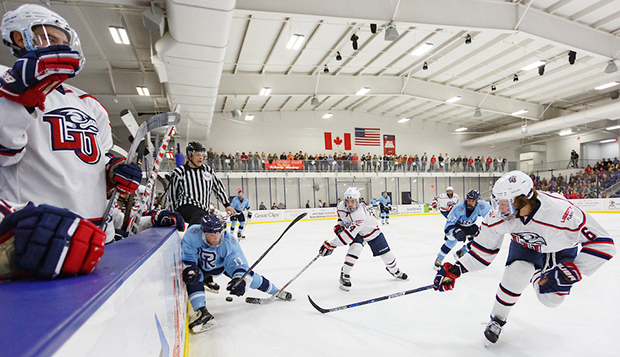 The Flames battle the Rams for puck possession along the boards near their own bench at the LaHaye Ice Center.

The 18th-ranked Flames' 4-2 triumph completed a four-game season sweep of the unranked Rams and their seventh straight victory should help solidify Liberty's ninth ACHA Division I National Championships bid in the past 11 seasons.

"Rhode Island played well and I thought we had a better game tonight," Liberty Head Coach Kirk Handy said after his team outshot the Rams 45-27. "We scored some timely goals. We'll have to wait until Wednesday's (final ACHA DI rankings) to see about nationals, but I feel good about winning two and winning by two goals tonight."

The Flames (26-12, 13-7 ESCHL) needed one minute less than they did Friday night to end the scoreless tie by capitalizing on a power play with 12:36 left in the second period. Freshman forward Quinn Ryan sent a pass from along the boards on the left wing across the slot to sophomore defenseman Zane Schartz, posting up on the right endline, for a one-time, top-shelf, forehand finish.

After an icing violation against the Rams (18-11-3-4, 6-8-2-4) two minutes later, Ryan returned the favor with a putback in the left crease of a shot by Schartz off the ensuing faceoff for a 2-0 Flames advantage.

Rhode Island cut the deficit in half just over four minutes into the third period when forward Ray Boudlette received a backhanded pass from linemate Luke Vendetto in the Flames' defensive zone and lifted a wrist shot from the top of the left circle into the top right corner of the cage, past senior goalie Matt Pinel.

Pinel preserved Liberty's 2-1 lead with a lunging glove save of a Rams shot from the left boards that kicked off his pad and into the air.

"Pinel made some big saves at that was a huge save," Handy said. "It was 2-1 and he reaches back for that one. Matt's a leader on this team. He battles hard every day and we appreciate him."

Ryan appeared to put Rhode Island away with Liberty's second power-play goal, one worthy of ESPN SportsCenter consideration, with 3:57 remaining in regulation. He won the puck along the boards near the red line to freshman linemate Brock Thompson, who fed him a return pass at center ice. Ryan burst across the blue line before weaving his way between two Rams defensemen and deking the puck to the left and then the right of Rhode Island goalie Caleb Neal before slipping it through the five-hole to pad the Flames' lead to 3-1.

"That was a great play," Handy said. "What a goal. Quinn has three points tonight, two goals and one assist, so he had a great game for us."

"Quinn Ryan's an animal," fellow freshman forward Josh Hamilton added. "I don't know what's gotten into him, but he's playing amazing. He's a great player. He was all over the point sheet tonight."

However, the Rams battled back to make it a one-goal game with exactly a minute to play when forward Mike Pesola, trailing on a three-on-two rush, took a drop pass and lifted a wrist shot through traffic past Pinel, knocking his water bottle off the top of the net.

Rhode Island pulled Neal from the cage for the final minute before Hamilton iced the victory with an empty-netter on a breakaway with 37 seconds to go.

"It's always nice to get the last win of the season for the fans," Hamilton said. "Rhode Island's a good team and they came back and we held our own and came out with a win. There's a possibility that we'll play them again (in next weekend's ESCHL playoffs hosted by the Rams) and it'll be another good game."

On a Senior Night when Pinel, forward and leading scorer Grant Garvin, defenseman and head captain Ben Hughes, and forward Colt Steele were honored before what was potentially their last home game for the Flames, Handy was pleased with their leadership as well as the progression of his underclassmen throughout the season.
"It was a good game and it's a credit to these seniors," he said. "We made a big cultural change this year and these guys bought into it. They're a big part of our foundation, especially this year we needed them because it was such a young lineup. I'm proud of all the guys. They've battled all year and improved on what they're doing. It's been a fun year. It's been a challenging year, but one that's rewarding. By no means are we done. We want to just keep building on our success."

The Flames, who finished third in the ESCHL's regular-season standings behind Delaware and Stony Brook (which receive first-round byes), will face sixth-seeded West Chester — another team they beat four times this year — in Friday's first round of the ESCHL playoffs.

"We're ready for them," Hamilton said. "We're excited. We're ready to get the playoffs rolling and give it our best shot at nationals. Absolutely, we're going for it all. We're not satisfied until we win (the ACHA title)."