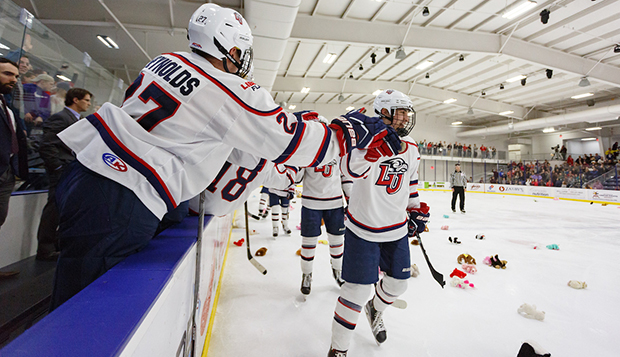 The 18th-ranked Flames (25-12, 12-7 ESCHL) and Rams (18-10-3-4, 6-7-2-4) were locked in a scoreless draw for nearly half of the game before Ryan finally gave the near-capacity College For A Weekend (CFAW) crowd something to get excited about, netting the golden goal unassisted with 11:32 remaining in the second period.

Moments after sophomore forward Owen Harris' turnaround shot deep in the right crease hit the right post, Ryan intercepted the puck near the red line and skated past a fallen Rhode Island defenseman on a breakaway. Showcasing his speed and stickwork, Ryan accelerated through the slot before deking the puck to the left of Rams goalie Caleb Neal and lifting a backhanded shot into the top shelf.

"I got lucky there," Ryan said. "They had a turnover in the neutral zone and I picked it up. I had a lot of space and I took it and I saw the backhand open so I just went for it and luckily it went in. It was nice to get the boys going and the teddy bears out there, so it was fun."

He and his teammates were showered with 471 stuffed animals — which paid for the admission for the fans who threw them in support of Gleaning for the World's Teddy Bear Brigade — as they celebrated the tiebreaking score alongside the Flames' bench.

Liberty junior Josh Halpenny turned in a gritty performance in goal, standing his ground — and on his head — under relentless pressure from the Rams.

"It was a good defensive effort, but I would say it was a great effort by Halpenny," Flames freshman defenseman Matt Cruickshank said. "He shut the door the whole game. He's been out for a while (after offseason surgery) and he's really showing what he has and the boys love it. He was awesome."

Rhode Island outshot Liberty 31-29 on the night, including 12-5 in the first period and 13-8 in the third. The Flames did hold a 16-6 shot advantage in the second, when they converted the game's only goal.

At the 12:00 mark of the third period, Rhode Island nearly netted the equalizer while crashing the Flames' cage on the rebound of a shot from the left point. The Rams' forecheck from Ray Boudlette and Michael Pesola pinned Halpenny in and the puck kicked off the back of his skate and caromed off the left post before being called dead just in front of the goal line.

"It was a good team effort for both games," Halpenny said. "It was close, but the guys helped me out in those situations, too, coming behind and making sure nothing trickled past me."

In the final minute, Rhode Island pulled its goalie and generated a few more quality scoring chances — the first after a shot by Matthew Kowash right off a faceoff followed by a Pesola shot in the right crease that bounced over the head of Halpenny, who fell backwards on it to trap the puck before it slid across the goal line.

"On the last one there, the puck dropped behind me and I couldn't see where it was," Halpenny said. "I just laid down and try to cover as best as I could. Before the game, Bert (Flames goalies coach Dan Berthiaume) told me to try to cover everything I can, freeze everything, so that was what I tried to do."

Halpenny made another clutch glove save off a deflection by Pesola off a shot from the top of the right circle by Kowash to help preserve his second straight shutout win, after starting last Saturday's 10-0 triumph against Rutgers.

"It was more work this time around," Halpenny said. "They're a good team. They work hard. We've just got to improve on the little things and clean up our game."

"Hopefully, we'll come out a lot stronger and get a bigger win because we need it," Ryan added. "We definitely need momentum going into the (ESCHL and ACHA) playoffs. We just need to keep doing what we've been doing the past couple of weeks."

Cruickshank said Liberty left plenty of room for improvement, even defensively in the shutout, for Saturday's rematch with the Rams at the LaHaye Ice Center, where the puck will again drop at 7 p.m. in the Flames' home finale on Senior Night.

"We're looking for nationals right now and this came down to the wire, so a 1-0 game (against an unranked opponent) doesn't help us too much," Cruickshank said. "It wasn't our best effort tonight, but forwards came back and helped on defense so it was a team effort.  We have to play real hard (on Saturday) and get some more goals." 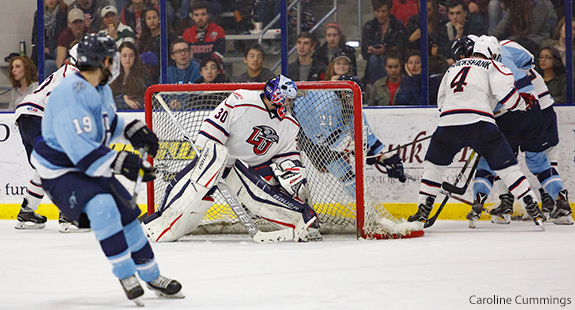 Flames goalie Josh Halpenny looks through the net as Matt Cruickshank battles for the puck.