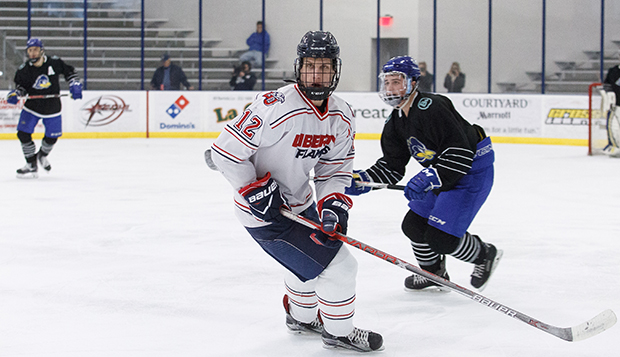 Senior forward Devon Docksteader scored two goals to help the Flames advance past the Blue Hens for the first time in three tries at the Mid-Atlantic Collegiate Hockey tournament, hosted by Delaware.

The past two seasons, Liberty was eliminated by the Blue Hens in the MACH tournament. This time, Delaware had the home-ice advantage playing on its Olympic-sized rink, but Liberty (24-1-1, ranked No. 2 in the Southeast Region) used it in its favor and advanced to Saturday's South Division final against ninth-ranked UMBC, set for 4 p.m.

"We really kind of took control early," Liberty Head Coach Chris Lowes said. "We were up 3-0 or 4-0 midway through the first period and it got pretty dirty after that. End-of-season games are often like that. They have a lot of seniors and we jumped all over them early and they got frustrated. So we slowed it down, played a deep bench, and tried to get out of there with everybody healthy and without getting thrown out."

Three of Liberty's four first-period goals were scored on the power play. Freymond converted two of them and senior linemate Devon Docksteader and junior forward Tim Bierema netted the others.

Senior forward Jordan Barstead extended Liberty's lead to 5-1 with a breakaway early in the second period before Freymond completed his hat trick by putting back a rebound in front on a five-on-three power play. Docksteader added a goal in four-on-four play midway through the second period before freshman forward Victor Blomberg capped the Flames' scoring in the third.

Freshman forward Caleb Toone and senior forward Caleb Weesner replaced Docksteader and Freymond for much of the last two periods and Lowes rotated in eight defensemen to keep the Flames fresh and minimize chances of injuries to his starters.

Freshman goalie Jarrett Epp was named the MACH Player of the Game.

Rider and Rowan were playing in one North Division semifinal Friday night before Penn State and Army squared off in another with the winners meeting in the North Division final and the champion playing the South Division winner in Sunday's final.

"There's good competition here and it's a good chance to play three games in three days," Lowes said.  "UMBC a good team. This will give us something either to be motivated or give us momentum going into nationals."