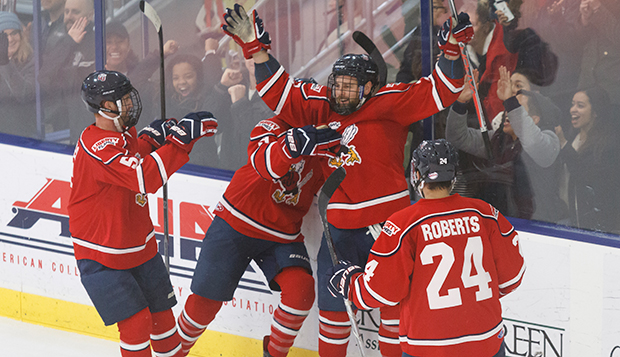 Forward Zak Hayes celebrates a goal in the Dec. 9 Midnight Mayhem win over IUP at the LaHaye Ice Center.

After sweeping Rhode Island on its first road trip of the 2016-17 season in mid-October, Liberty University's ACHA Division I men's hockey team hopes to repeat that feat in this weekend's final home series of the year against the Eastern States Collegiate Hockey League (ESCHL) rival Rams at the LaHaye Ice Center.

The Flames (24-12, 11-7 ESCHL) remained at the No. 18 spot in this week's ACHA DI rankings after sweeping unranked Rutgers last weekend at home. Riding a five-game winning streak, Liberty will look to extend that streak to seven (and improve to 17-5 at home) going into its first ESCHL Tournament, to be hosted by Rhode Island next Friday through Sunday at Boss Arena in Kingston, R.I.j

"We're just playing for our lives right now and we're playing to get into the ACHA DI playoffs and that's a big thing for us," Liberty Head Coach Kirk Handy said.

Liberty completed its sweep of the Rams in dramatic fashion with a 4-3 victory on Oct. 15, with freshman defenseman Matt Cruickshank sacrificing his body to block multiple shots on a five-on-three penalty kill late in regulation before center Grant Garvin finished a putback of a shot by defenseman Ben Hughes in sudden-death overtime.

For this Friday's opener against the Rams, fans are encouraged to bring new and gently used stuffed animals to receive free general admission tickets or discounts off reserved seats. They will in turn toss the animals out onto the ice after the Flames' first goal in support of Gleaning for the World's annual Teddy Bear Brigade.

Liberty scouting report: The Flames showcased their top line in last weekend's sweep of Rutgers, with freshmen Quinn Ryan (14 goals, 24 assists) and Brock Thompson each netting hat tricks in Saturday night's second game after leading scorer Garvin (19G, 24A) returned from a bout with the flu. But Handy was equally impressed with the gritty performance of its line of sophomore forwards Zak Hayes (15G, 22A) and Zechariah Roberts, complemented by freshman Josh Hamilton (11G, 15A).

"They've probably been, in the past four or five games, our most consistent line and we've used them in key situations and they've done well," he said.

Freshman goalie Josh Halpenny (3-1, 2.73 goals-against average, 91.9 save percentage) notched his first shutout of the season in Saturday's 10-0 blowout after Pinel (12-9, 3.27 GAA, 89.6 SP) recorded his third the Saturday before in completing a sweep of Davenport.

Rhode Island scouting report: Rhode Island, which won its only ACHA DI national championship in 2006, started the New Year ranked No. 23, when it was 16-4-4, but slipped out of the top 25 in mid-January after splitting series with Rutgers and Buffalo. Since then, the Rams (18-9-7) have lost six in a row, though five of those losses have been by one goal (four in shootouts) — in sweeps by Drexel and ESCHL foes Delaware (ranked 17th) and Stony Brook (No. 12) last weekend. Rhode Island, which is 7-3-1-2 on the road this season, has also won one and lost three games in overtime, including the second home game against Liberty.