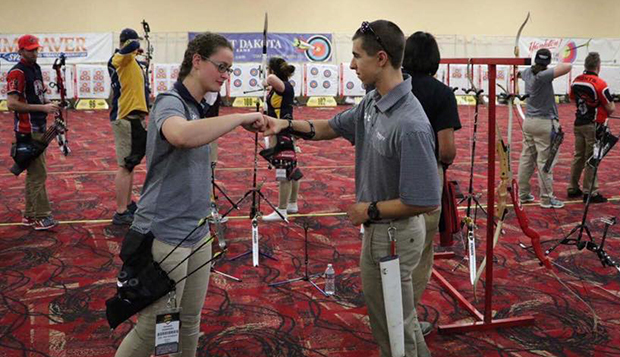 Sophomore Meredith Dissinger, who placed first in the women's recurve competition at the U.S. Collegiate Archery Association (USCA) South Region event held Jan. 28-29 in Madisonville, Ky., finished second out of the eight national qualifiers with a final score of 748.

The national championships were part of a much larger event, the World Archery Festival Vegas Shoot, and the collegiate archers shot in the same flights as professionals competing for prize money.

"It was a lot of fun to be a part of it, out there in Vegas and to be surrounded by professionals from the world of archery, TV personalities, and a trade show," Flames Head Coach Mitch Reno said. "It's the largest event of its kind and it was a blast."

Both Dissinger and Martin went to shootoffs with the eventual champions for their respective individual titles. Finalists would shoot three arrows at a time and add up the scores, with the archers awarded two points for a win, one point for a tie, and none for a loss, with the first person to reach six points declared the champion. Martin's final went to five rounds before being decided in a sudden-death, one-arrow shootoff.

"There was a ton of people standing around in the room, watching the finals, so it was a really high pressure situation, and they performed really well," Reno said.

Blanthorn, competing in only his second indoor event, showed the most potential for improvement.

"He's come so far in so short a time and he's a very dedicated shooter," Reno said. "Evan was in the practice range for hours, working on his shot, taking pictures, and writing notes, talking to some of the professionals. I'm looking forward to seeing how he does at the USCA 3D Outdoor Nationals in Illinois in the fall."

The Flames and Lady Flames have already begun prepping for that event, and Reno and graduate assistant Ian Rigney are in the process of determining the 16 team members that will likely travel to compete.

"The largest group we've taken to that event is 11 so we want to keep growing the team and adding quality," Reno said. "We're setting a team goal to come home with four national titles."