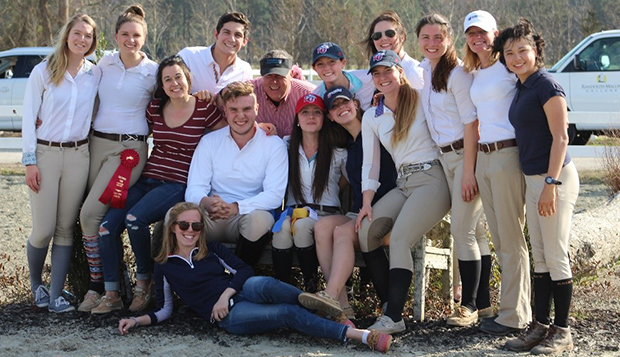 Sophomore Ryan Wambolt, the Flames' only men's rider, was the hero this time around, entering the final class of the day with Liberty tied with Mary Washington for first place in the overall team score. His blue-ribbon performance put his team over the top.

Chenelle maintained her lead in the running for Cacchione Cup Champion, the individual High Point Rider in the region. Winning the award would earn her an automatic bid to become Liberty's first equestrian competitor to qualify for the IHSA National Championships, set for May 4-7 at the Kentucky Horse Park in Lexington, Ky.

Liberty will travel to Fredericksburg, Va., for the final regular-season Hunter Seat show this weekend, hosted by Mary Washington, where it will attempt to protect a slim 13-point lead over the perennial regional champion Eagles. If it can clinch the regular-season regional title, Liberty would advance as a team to compete at the Zone 4 Championships in North Carolina in March.

Goucher College and East Carolina University have already clinched spots at the Zone 4 event by winning their respective regions. Meanwhile, Emory & Henry College is protecting a small lead entering its final weekend of competition and Bridgewater College is trying to hold off a Randolph College team that has won the last two shows in their region.