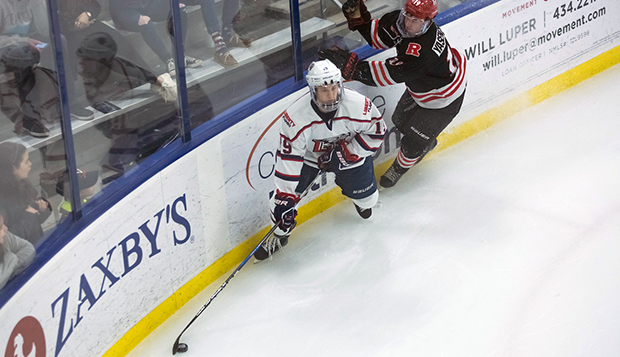 Freshman Quinn Ryan handles the puck along the boards in Friday night's opener against Rutgers at LaHaye Ice Center.

Liberty University's ACHA Division I men's hockey team skated to the No. 2 spot on ESPN SportsCenter's Top 10 Plays of the Night on Saturday night with a spectacular goal by freshman forward Quinn Ryan in the Flames' 10-0 rout of Eastern States Collegiate Hockey (ESCHL) rival Rutgers at the LaHaye Ice Center.

The goal, which gave Liberty a commanding 5-0 advantage in the second game of a sweep of the Ice Knights, moved Ryan ahead of sophomore defenseman Zane Schartz into second place among the Flames' scoring leaders with 38 points (14 goals, 24 assists), behind only junior forward Grant Garvin (19G, 24A, 43 points).

The win, Liberty's fifth in a row, moved the Flames (24-12, 11-7 ESCHL) into second place in the ESCHL standings and could boost their No. 18 ranking in the ACHA DI poll that determines the 20 teams that qualify for the March 9-14 ACHA National Championships in Columbus, Ohio. Liberty concludes its regular season with a series against ESCHL rival Rhode Island this Friday and Saturday at 7 p.m. at the LaHaye Ice Center.