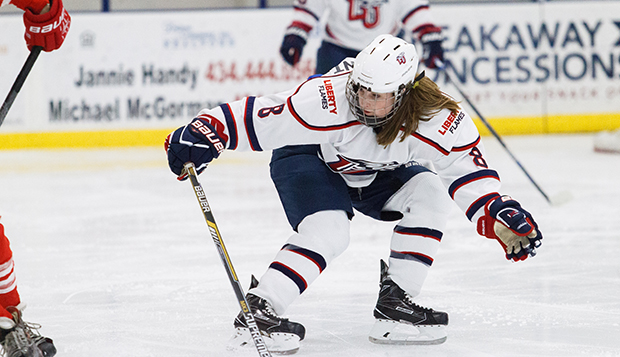 Liberty University's top-ranked ACHA Division I women's hockey team swept Penn State on its home ice for the second time in three weekends, 7-2 at the Pegula Ice Center in University Park, Pa., to wrap up its regular-season schedule on a 16-1 streak.

Tensions ran a little high as the Ice Lions' pride was on the line, playing on its Senior Night.

"It got a little rough," Bloomfield said. "With this being their last game of the season and with them graduating six girls, they were taking some vengeance on us. I told our girls to stay out of the box, to play hockey, and the best revenge is to put shots in the net. We didn't get any penalties after the first period."

Liberty opened a 3-1 lead after the first period before adding two more in the second and third.

PSU got a goal back at the 4:11 mark before Smibert netted her second, finishing a third assist from Gibson with 43 seconds left in the first period.

The Ice Lions scored their last goal with 11:13 left in the second period before Lady Flames sophomore forward Tara Lee made it 3-1 with 1:26 to go off assists from senior forward Courtney Gilmour and junior forward C.J. Tipping. Then, with eight seconds left in the stanza, Morris tallied off an assist from Smibert.

Finally, in the third period, Gibson scored unassisted with 13:02 to play and Tipping netted the final goal off a feed from sophomore defenseman Katie Comeau with 2:44 left.

Sophomore goalie Kelly Hutton made 20 saves to preserve the victory for the Lady Flames, who have more than a month off before pursuing their second ACHA DI National Championship title in three seasons at the March 15-19 event in Columbus, Ohio. With the final rankings that will determine the tournament's eight qualifying teams set to be released in the next two weeks, the Lady Flames should expect to remain at No. 1, solidifying the top seed.