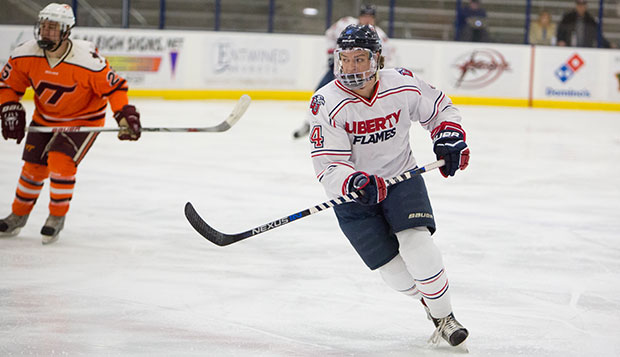 Liberty senior defenseman Daniel Huntington looks up the ice during the Flames' 5-2 Showcase win over Virginia Tech on Jan. 13 at the LaHaye Ice Center. (Photo by Jessie Rogers)

Senior linemate Ben Freymond added a goal and four assists and junior linemate Paul Lamoureux, filling in for graduate forward Danny Logan, contributed two goals and two assists to spark the Flames (23-1-1), who are the No. 2 team in the Southeast Region rankings  behind only defending ACHA DII national champion Florida Gulf Coast. Virginia Tech (7-20-1) got a solid performance in goal from senior Tanner Jones to keep it from being a more one-sided contest.

"Our power play was buzzing and generated some good chances," Liberty Head Coach Chris Lowes said. "(Jones) made some really good saves and we had to really work and finish some back door plays."

Liberty outshot Virginia Tech 44-27 and sophomore goalie Jarrett Epp made 24 saves as the Flames killed all five of the Hokies' power plays.

After boosting the Flames to a 3-1 first-period advantage, Docksteader and Freymond assisted sophomore defenseman Adam Gnatowski on a backdoor play before Virginia Tech scored the next two goals to make it a 5-3 contest. Junior Tim Bierema extended the lead to 6-3 with a power-play goal at the end of the second off assists from Docksteader and Freymond. Then in the third, Freymond finished a feed from Lamoureux and Bierema capped the scoring with a shorthanded score in the final 10 seconds off of Docksteader's third assist.

"We're the No. 1 seed and we play Delaware in the first round," Lowes said. "(The Blue Hens have) knocked us out of the last two MACH playoffs and they're hosting the tournament on their Olympic-sized ice."

The next ACHA rankings will be released on Tuesday when the Flames will find out if they have clinched one of two autobids to the March 15-19 ACHA DII National Championships in Columbus, Ohio.