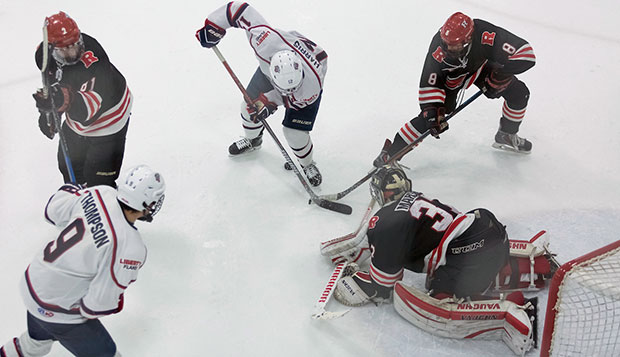 "We challenged our guys tonight, for sure, just trying to say, ‘We need to progress as a team,'" Flames Head Coach Kirk Handy said. "I really felt like tonight we got back to the way we played last weekend (in a sweep of No. 4 Davenport) and we were able to get our power play clicking.

"Our D played well and that was great for Josh," he added of Halpenny, who stopped all 22 shots he faced. "He's a guy who's battled injuries and come back from a big surgery and he played well for us tonight and it's nice to have all guys in that locker room tonight who were on the same page. A big part of the victory was we had all the guys pulling in the same direction and staying on board for 60 minutes. That's a complete game."

Junior center Grant Garvin, who missed Friday's opener with a bout with the flu, returned to complement the line of Ryan and Thompson, who finished with six points each for the Flames (24-12, 11-7 ESCHL).

"It was big having Garvin back," Handy said. "He's not 100 percent and that's a gutsy move on his part coming to play. That's leadership. Garvin's a big part of our team, a big part of that line. Those guys had a great game tonight."

The second came in the second period off the stick of Ryan, whose backhanded sling shot over the shoulder of Rutgers (12-15-1, 9-11 ESCHL) goalie Christopher Marsillo inside the top right corner of the cage completed his hat trick.

"That's probably the nicest goal I've seen at Liberty since I've been involved," Handy said. "Quinn's a talented hockey player. What I like about Quinn is not only the offensive part of his game, but he's also become a really solid two-way player for us, which has been huge."

Ryan capitalized on two power plays, the first in the closing seconds of a man advantage that started five minutes after the opening faceoff. Ryan put away a putback in the left crease of a shot from the slot by freshman forward Brock Thompson after Garvin couldn't get a stick on it.

Seven minutes later, Thompson ripped an unassisted shot from the inside edge of the left circle into the upper netting for a 2-0 edge with 6:00 left in the period.

Just 50 seconds later, Harris made it a 3-0 after receiving a pass in front from Jamie Crane and passing on an open look in the left crease before skating clockwise around the cage, drawing starting goalie Andrew Krynicki out of position before deftly tucking the puck around the right post.

The Flames were awarded another power-play opportunity six minutes into the second period after sophomore forward Zak Hayes slid to block a shot from the point off the stick of Ice Knights defenseman David Stickle and got back up to start a two-on-one break with freshman forward Josh Hamilton, who was taken down on the play. Just 32 seconds into the five-on-four advantage, Ryan netted a putback of a shot by Garvin and secondary assist from Thompson through the five hole from deep in the left crease.

Ryan put the finishing touches on his second hat trick at Liberty three minutes later, balancing the puck on the tape of his stick and slinging it into the goal like a lacrosse shot to give the Flames a commanding 5-0 lead 11 seconds before the game's midpoint.

"Me and Brock Thompson have worked on that after practice a lot and I decided to try it in a game," Ryan said. "Why not? Luckily, it worked out."

That's how the score remained until Liberty added five more goals in the third period to reach double figures for only the second time this season, after dominating Alabama, 11-2, the night after losing the "Midnight Mayhem" matchup to the Crimson Tide.

Sophomore forward Zechariah Roberts started the third-period scoring just a minute into play with a spectacular move on a shorthanded breakaway. He received an outlet pass from junior defenseman Ben Hughes and threaded the puck between the legs of Rutgers forward James Summers in the defensive zone before cutting back across the crease and lifting a backhanded shot over the pad of Marsillo.

Ryan then had a hand in helping Thompson complete his first hat trick as a Flame, assisting his last two scores, the first a rifle of a wrist shot from the left circle into the top left corner of the net at the 17:48 mark.

Two minutes later, Hayes sent a pass out of the left corner to Hamilton, who skated in front and wrapped a forehand around Marsillo to stretch the lead to 8-0. No goals were scored over the next 15 minutes before Thompson tipped Ryan's shot from the high slot over the glove of Marsillo with 1:36 left and Hamilton one-timed a beautiful fast-break feed from Hayes between two defensemen at the 1:03 mark.

"Josh Hamilton, Zechariah Roberts, Zak Hayes, they've been probably in the past four or five games our most consistent line and we've used them in key situations for us and they've played well," Handy said.

Liberty's last two games at the LaHaye Ice Center are next Friday and Saturday at 7 p.m. against Rhode Island, which will host the ESCHL playoffs the following weekend.

"We need to get back to work this week because we got Rhode Island coming in next weekend which is a top-25 team," Handy said. "So we're going to have to have a great week of practice to get ready for our last two home games of the year."

Friday's first game will be the annual "Gleaning for the World" Teddy Bear Toss night, with fans bringing a new or gently used stuffed animal to throw out onto the ice after the Flames' first goal receiving free admission.