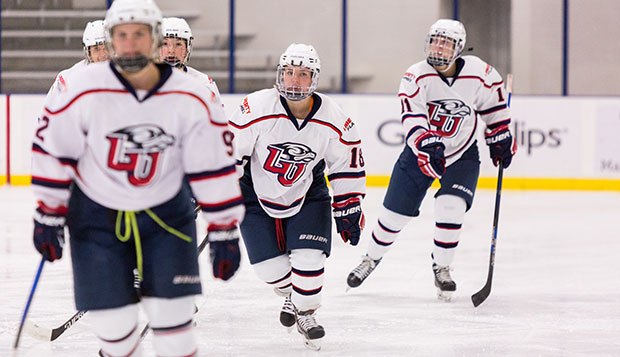 Liberty University's ACHA Division I women's hockey team got goals from four different players and a third shutout by freshman goalie Nadia Rupoli to win for the 15th time in the last 16 games, 4-0, in Friday night's opener against Penn State at Pegula Ice Arena in University Park, Pa.

The Lady Flames (21-7-1), playing their second series at Penn State in three weekends, outshot the Ice Lions (5-18) by a 46-14 count. Liberty was only assessed one penalty in the game and scored all four goals at even strength.

"Penn State's not ranked but they're not a bad team," Lady Flames Head Coach Paul Bloomfield said. "They're actually a lot more competitive than (No. 13) McKendree was last weekend. It was a pretty decent game. The girls played really strong and controlled a lot of play in their end. Their goalie, Megan Lydick, was outstanding, especially on a lot of our scrums in front of the net. She kept them in the game."

"She did a great job," Bloomfield said. "It's hard for goalies when they're not busy like that. One period, she only saw one shot."

Just over four minutes later, freshman forward Tiana Lisle stretched the Lady Flames' lead to 2-0 with an unassisted goal off a breakaway with 12:15 left in the first period.

Liberty's last two goals came less than five minutes into the second period — by freshman forward Aly Morris assisted by sophomore defenseman Katie Comeau — and with less than five minutes left in the third. That's when junior defenseman C.J. Tipping fired an unassisted shot from the point through a crowd in front of the net that screened the puck from Lydick's sight.

As the No. 1 team in the nation for the past three computer rankings, Liberty doesn't want to slip in the polls or in its performance level as it prepares for the March 15-19 ACHA DI National Championships in Columbus, Ohio.

That's why Bloomfield had the Lady Flames make a return trip to Penn State, after Northeastern canceled its weekend series with the Ice Lions.

"If we hadn't played for the next two weeks, we probably would have fallen out of first place, and that would affect our seeding going into nationals," Bloomfield said, noting that he would like to avoid meeting fifth-ranked Grand Valley State or sixth-ranked Lindenwood-Belleville in the first round of the eight-team tournament. "Since Penn State is an ACHA opponent, these games will count toward our ranking."

Sophomore Kelly Hutton will start in goal for the Lady Flames in Saturday's rematch, when the puck is set to drop at 6:30 p.m. back at Pegula.