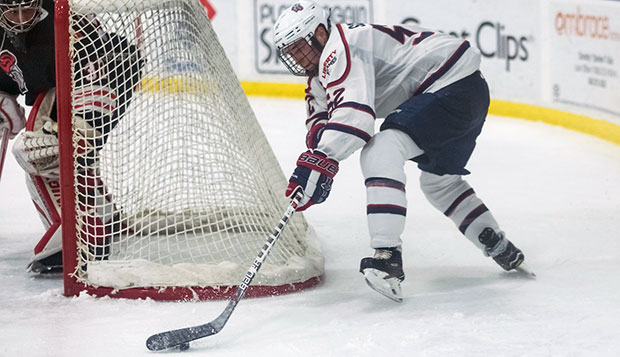 There were a couple moments in Friday night's clash between Liberty University's No. 18-ranked ACHA Division I men's hockey team and visiting Rutgers — a critical series between Eastern States Collegiate Hockey League (ESCHL) rivals at the LaHaye Ice Center — where the outcome was very much in the balance.

Despite outshooting the Ice Knights 67-18 on the night, and eventually emerging with a 5-3 victory, Flames Head Coach Kirk Handy wasn't satisfied with his young team's overall effort and intensity level.

"We just want to be playing a better game," Handy said. "Our level of play wasn't where it needs to be."

The Flames (23-12, 10-7 ESCHL) were without the services of junior center and leading scorer Grant Garvin, who missed the contest due to a bout with the flu. His absence was apparent in the first period as Liberty was unable to capitalize on a few golden scoring chances deep in Rutgers' defensive zone.

"We had some opportunities on the power play we obviously weren't able to convert," Handy said. "We just didn't have a solid game tonight. We were inconsistent in our effort, inconsistent in our play, so we're going to hit the reset button, come back tomorrow and bring our A game (Saturday) night."

Moments after Liberty failed to score on a power play, Rutgers (12-14-1, 9-10) nearly got on the board first on an own goal that was reversed late in the first period. Granted the reprieve, Liberty finally captured a 1-0 lead 28.6 seconds before the first intermission when freshman forward Owen Harris skated the puck off the Ice Knights' right end line and set up sophomore defenseman and second-leading scorer Zane Schartz on the left side of the blue line. Schartz lifted a wrist shot that found the top right netting through a screen in front by freshman defenseman Drew Crilly and freshman forward Cody Clarke.

"Owen made a really nice pass to me and I don't think the goalie even saw the puck," Schartz said. "I just threw it on net and it went in because of their net-front presence."

After Liberty killed a five-on-three opportunity for Rutgers midway through the second period, Quinn Ryan showcased his speed and stick skills by chasing down a puck dumped toward the Ice Knights' cage by fellow freshman forward Josh Hamilton from along the boards near the Flames' blue line. Ryan controlled the flipped puck in the right crease and put away the one-on-one score with a quick cutback move and wrist shot over the glove of goalie Christopher Marsillo — a split second before being checked from behind by a Rutgers defenseman into the back boards. That doubled the Flames' advantage to 2-0 with 8:26 left in the period.

Liberty extinguished another Rutgers five-on-three chance four minutes later before the Ice Knights cut the deficit in half 1:52 before the second intermission when forward Mitch Crenshaw picked up a loose puck in the left corner and skated along the left end line before lifting a shot off the back right shoulder of Flames senior goalie Matt Pinel inside the near post.

Rutgers forward Victor McCutcheon was issued a five-minute major misconduct penalty after grabbing Flames freshman forward Jamie Crane into the Ice Knights bench after fellow forward Nick Holowko slammed Crane to the ice along the boards. That resulted in roughing penalties to both players after sophomore defenseman Kyle Crane stood up for his younger brother.

Less than a minute later, with the teams battling in four-on-four action, Liberty extended its lead to 3-1 when freshman defenseman Basil Reynolds maneuvered between two defensemen and slid the puck from right to left across the crease to Hamilton for a one-time finish inside the left post with 13:06 remaining in regulation.

"The Crane brothers, the bash brothers, gave us a little momentum and we just used that momentum to push forward and get the last push at the end," Schartz said.

Clarke appeared to put the victory on ice with a putback from near the right post of a wrist shot from the left point by Schartz, set up by Crilly, with 6:07 to play.

However, Rutgers responded 30 seconds later when C.J. Maksut intercepted a clearing pass in the slot and leading scorer Brian Gnad put away a loose puck near the right post off a rebound deflection across the goalmouth from fellow forward Kevin Fitch.

Then, with 39.7 seconds left, after the Ice Knights pulled Marsillo to create a man advantage, they trimmed the deficit to 4-3 by cashing in on another failed clearing attempt in front of the Flames' cage when Gnad swiped the puck and sent a backdoor assist across the crease to Holowko for a wide-open finish.

Finally, with 22 seconds left, No. 22, Liberty sophomore forward Zak Hayes, pushed the final margin to two goals by chasing down a clearing pass from freshman defenseman Chaydan Lauber and poking the puck past a defenseman with one hand on the stick into the empty net.

"That goal was obviously really big for us in the (computer) rankings," Schartz said. "A two-goal win is much better than a one-goal win, obviously. The bigger the spread the better."

With Garvin out of the lineup, all of the Flames' goals and assists came from underclassmen.

"We have a bright future, but we want to focus on this year and making a push into the ESCHL playoffs and on to nationals and going all the way if we can," Schartz said. "We just want to glorify God through our efforts. That's what we're using as our motivation, to glorify God through hockey and our success out there."