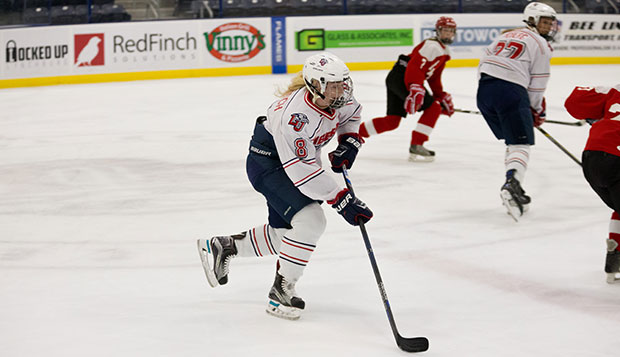 "This season, we currently have the most goals scored since the programs start with 56, and there are four games still to go," Lady Flames Head Coach Sara Niemi said, noting that Liberty is now tied for fifth out of 22 teams in the East ACHA for most goals scored, and tied for 11th of 41 teams in all of ACHA DII for most goals scored. "In past years, offense has been the weaker part of our game, so it is extremely encouraging to see that area starting to take shape."

"We were not sure what to expect (from the visiting Panthers) and the ladies came out hungry for a win," Niemi said. "The team played very confident and produced a lot of offense, which is something we have been working on all season. Our defense was also strong, helping (junior goalie) Faith Gerber post her first shutout of the year."

The Lady Flames will return to their home ice next weekend to conclude their regular season with a two-game series against Rochester Institute of Technology, set for Saturday at 10 p.m. and Sunday at 11 a.m.